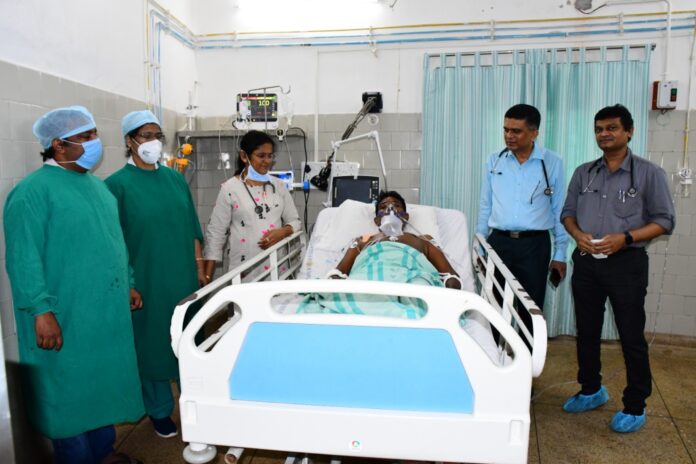 Rourkela : Expert medical intervention and exemplary commitment of a team of doctors of Ispat General Hospital (IGH) of SAIL, Rourkela Steel Plant (RSP) has helped save the life of a critically ill patient who had suffered a massive heart attack.
52-year-old Mr. Yoginder Oram, working as a senior technician in the Raw Materials Handling Plant (RMHP) department RSP, was admitted to the Ispat General Hospital on 20th August with severe chest pain. He was diagnosed with a heart attack. Pumping failure had also occurred and his blood pressure was dropping and oxygen level was severely depleting. It was most difficult to do his angiography under these circumstances.
The medical team of IGH decided to first stabilize the patient’s condition and hence he was administered medicines through “round-the-clock infusion”. After 2 days on the ventilator, the patient gradually stabilized. With the tireless efforts of the medical team, in the next 48 hours he started to recover completely.
The team comprised of Dr. Sanjukta Panigrahi, Additional CMO (M&HS), Dr. Ajay Kumar, Consultalt (ICU), Dr. P K Mohapatra, Additional CMO (M&HS), Dr. Vivek Mahanta, Senior Consultant, Dr. Sushil Kumar, Consultant and Nursing Incharge Sister S. George and other sisters and hospital staff.
It is noteworthy that, Ispat General Hospital, Rourkela is a 685 bedded modern hospital run by the steel giant SAIL for the employees of Rourkela Steel Plant and for people in and around Rourkela town in Western Orissa. It has the state of art technology with a motivated team of medical and para-medical professionals working to provide medicare of the highest standard. It annually takes 33,000 admissions and extends service to about 15 lakh patients in its OPD.