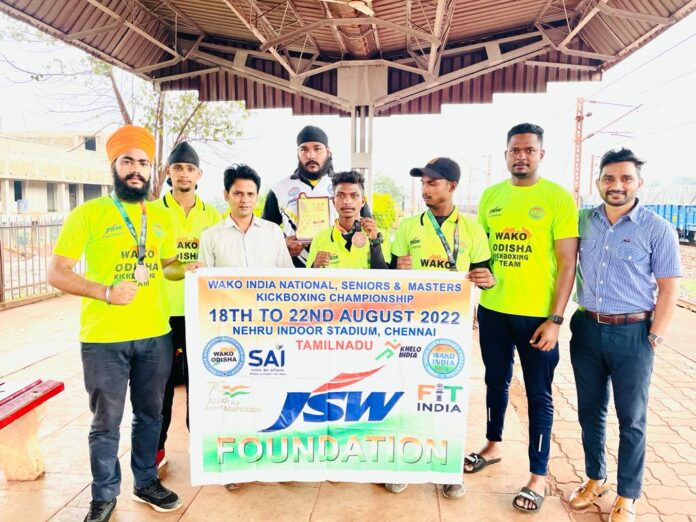 Barbil : In a glorious win, Keonjhar clinched four medals, sponsored by JSW Foundation, in the WAKO India National, Seniors and Masters Kickboxing Championship held from August 18-22 in Chennai.
Five young kickboxers from Keonjhar bagged four medals, including one gold and three bronze, and brought laurels to the district. The winners were Ashish Rout, Jaspreet Singh, Budhuram Munda, Pawandeep Singh and Harihara Barik.
The Kickboxers from Keonjhar, under the guidance of Manjit Singh, competed with the best talents from across the counter in various categories, aiming to grab as many medals as possible.
Their talents and hard practice paid off. Ashish Rout who bagged a gold medal in the championship for showing his skill against the opponents. On the other hand, Jaspreet Singh clinched a double bronze medal in the competition, while Budhuram Munda was satisfied with one bronze. Meanwhile, Pawandeep Singh and Harihara Barik participated in the quarter final.
Sharing his achievement, Ashish said, “I express my gratitude to my coach and JSW for enormous support. The competition was tough but I made my way through.”
The coach Manjit Singh, head coach of WAKO Odisha and general secretary of Sports Kickboxing Association of Keonjhar district, expressed his satisfaction over their performance.
“It is indeed a proud moment for me and the Sports Kickboxing Association of Keonjhar district to see five talented kickboxers represent the district in the national events.”
Manjit expressed his gratitude to JSW for the sponsorship support. He was confident enough that the kickboxers would bring laurels to the state if the support continues.
JSW authorities welcomed the team congratulated them for their success. The authorities also advised them to hone their talents and reach to the greater heights.
Around 1150 kickboxers from twenty-six states participated in the championship. Out of total, 40 participants were from Odisha including 5 from Keonjhar district. Odisha clinched 31 medals in the championship.