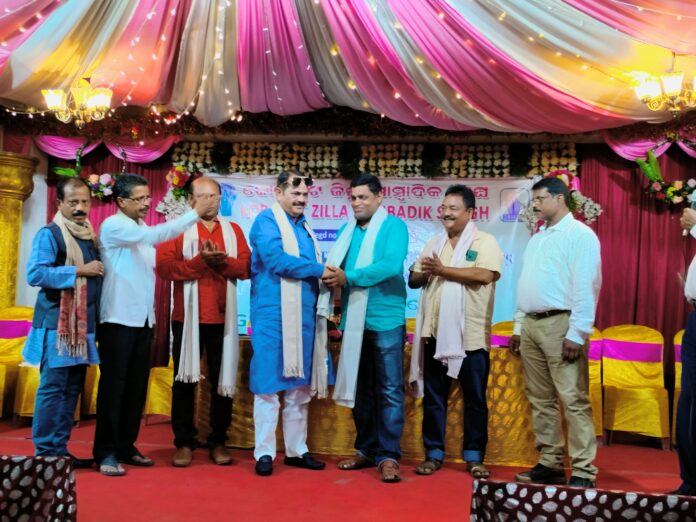 Bureau Chief PKB: Koraput Zilla Sambadika Sangha organised a meeting for the felicitation of Ajay Sahoo, the President of National Union of journalists by holding a general body meeting of Koraput District Sambadika Sangha here at Jeypore. In the felicitation ceremony, the MLA Jeypore Sri.Tara Prasad Bahinipati joined as chief Guest while Narendra Mahanty, Chairman , Jeypore Municipality joined as guest of honour. There is great amount of dedication and commitment being found emerging for the welfare of our state by State Union of Journalists as stated by the MLA Jeypore while appreciating the painstaking efforts being undertaken by the SUJ. Ajay Sahoo, the President, while addressing the gathering of journalists inspired everyone to stand united so as to serve each other during the unfortunate happenings. “I am always found dedicated to play the honest role during your not only requirement but also ever ready in highlighting your proposal for implementation before the govt , as categorically stated by Mr.Sahoo. The renowned journalist of Kalinga TV Mr.Kirti Sahoo who is also serving the State Union of Journalists as Vice-president motivated the august gathering of journalists present across the undivided koraput to extend cooperation for the welfare of the downtrodden and underprivileged. We should pledge not to underestimate anybody irrespective of the media he belongs to. Joining in the general body meeting, the eminent personality in the journalistic fraternity, Mr Vidya Choudhary, the Senior Reporter of The Indian Express stated ” We have enormous amount of scope under our disposal for the service of our motherland. “United we stand, divided we fall” as the President of Koraput Zilla Sambadika Sangha, Mr Choudhary stated aspiring for no boundaries among journalists. Mr.Tarun Kumar Mahapatra, the Secretary of the Union of Koraput Zilla Sambadika Sangha while addressing the gathering of journalists very categorically told everyone to fight for prevailing justice to the common people. Among others present on the dias, Senior journalist Rabi Nayak , social activist Sanjay Jain and NUJ active member Mr Babul Singh coordinated for the organisation of the felicitation ceremony. Reporters, journalists and the editors of both print, electronics and digital media were found to grace the occasion.