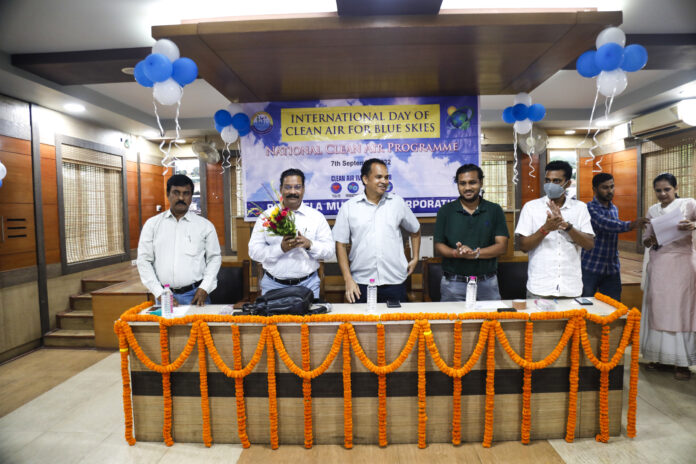 Rourkela(08-09-22): A National Clean Air Programme was conducted by Rourkela Municipal Corporation (RMC) on the occasion of the International Day of Clean Air for blue skies, which is designated by the United Nations General Assembly on 7 September to strengthen international cooperation in improving air quality and reducing air pollution.
This event was chaired by Deputy Commissioner Sudhanshu Bhoi, who stressed over the necessity of conducting such a programme. He emphasized the problems of air pollution and even pointed out a few measures to be undertaken by the citizens of Rourkela to lessen the pollution.
“Until and unless it is very necessary, one should not use cars or motorcycles. We should increase the usage of bicycles, or even walk to our destination. Anyone wishing to buy vehicles in near future should opt for electric cars and bikes. It is eco-friendlier,” Bhoi advised.
He even pointed out the various measures taken by the Rourkela Municipal corporation to curb the menace of pollution.
“In Rourkela, 8 micro composite units have been installed which converts the wet waste into compost. The dry and hard waste materials are sent to ‘Material Recovery Facility’ which is then forwarded to ‘Dalmia Cements’ where it is used to make bricks after due processing. Around 2243 metric tonne of such waste have already been sent to the cement company. Along with this, 67 battery operated vehicles are used to gather waste from across the city. Machines are used to clean up roads so that the suspended particles in air can be curbed. Moreover, whenever there is any kind of demolition, the waste products are either used to fill the open pits, or processed into useful things,” informed Bhoi.
B.B Dash, eminent scientist of State Pollution Board showed a presentation on the various problems created by air pollution in Rourkela and provided some sustainable solutions and created awareness regarding the same. National Institute of Technology (NIT) Rourkela Asst Professor Rabi Narayan Behera shared the impacts of air pollution in health hazards, andAdhunik Metalliks RN Padhi talked about the safety measures taken by companies for clean air.
Deputy Commissioner Sudhansu Bhoi, Deputy Commissioner Dr Gourabamaya Pradhan and Ronit Kumar, Asst Commissioner Sukanta Beura, Executive Engineer-in-charge Ajay Shah, all the employees of RMC and ‘swacch saathis’ participated in this national event.
Air pollution is at the heart of global public health, economy, agriculture, biodiversity, environment and climate crisis that both affects and needs the urgent attention of all sectors of society. The theme of the 2022 International Day of Clean Air for blue skies is the Air We Share.