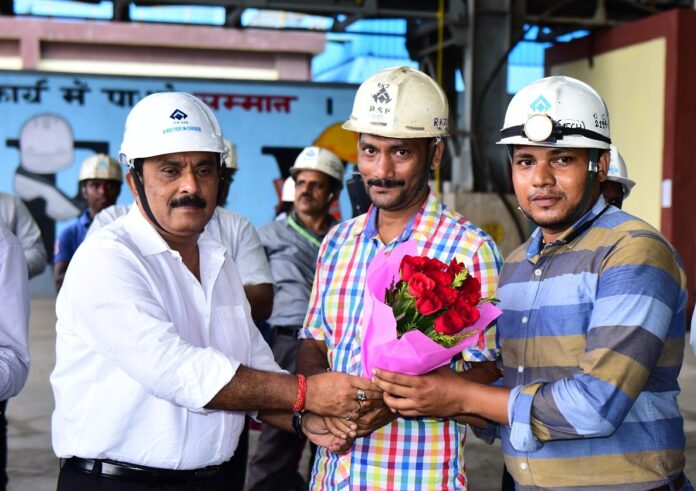 Rourkela(10-09-22) : SAIL, Rourkela Steel Plant (RSP) has scripted its best-ever April-August performance in major production areas. The steel plant produced 17,76,792 Tonnes of hot metal, 16,57,623 Tonnes of crude steel and 1518486 Tonnes of saleable steel during the first five months of the current fiscal, registering growth of 1.7%, 2.3% and 3.8 % respectively over the corresponding period last year (CPLY). Besides, the average oven pushing at the coke ovens (89.6) and sinter production (2911182 Tonnes) during the period were also the best ever performance since inception of the steel plant.
The success was replicated in dispatch too. By dispatching 1549276 tonnes of saleable steel, RSP clocked its best ever dispatch for the first five months and improved its last year’s record by 5.5 per cent.
The Silicon Steel Mill (SSM) department performed outstandingly well in August, 2022 by rolling 7510 Tonnes of Cold Rolled Non-Oriented Coil, which is its best performance for any month since inception. The earlier best monthly production of 7505 tonnes was achieved in May, 2008. The State-of-the-art Hot Strip Mill-2 (HSM-2) played an instrumental role in achieving the feat by feeding SSM with High Quality HR Coils in desired chemistry and specifications. The ultra modern Mill also surpassed a new milestone by rolling 7,00,000 Tonnes of slab weight in August, 2022 since it resumed production in October, 2021. The other notable features of the HSM-2 for the month was 2 back to back records. On 29th August, the Mill for the first time loaded more than 100 wagons in a single day (103 wagons) along with 7 trailers in a single day. The buoyant team HSM-2 followed it up with a record breaking rolling of 7289 tonnes slab weight on 30th August thereby improving its earlier best performance achieved a fortnight back on 15th August. The concerted and synchronized efforts of HSM-2 with Traffic and Raw Material(T&RM), Production Planning and control (PP&C) and all other associated agencies helped in achieving the feat. Notably, with the dedication and tenacity of the collective and able guidance of the top management, the ultra modern Mill has been steadily picking up production and enriching its product basket with customized value added products since its recent commissioning.
Mr. Atanu Bhowmick, Director In-Charge, RSP along with other Senior Officers had visited the Mill to congratulate the collective and encourage them to sustain the momentum to script new milestones in the days to come.