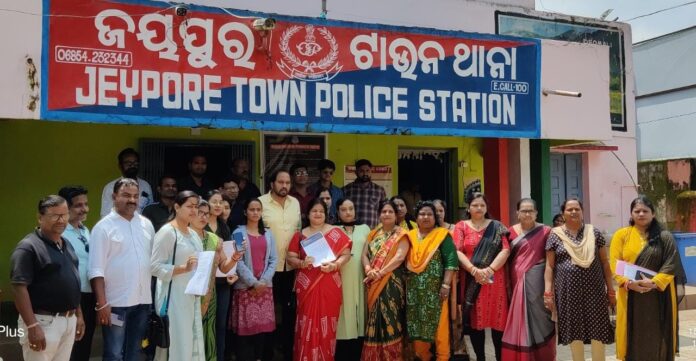 Buruea Head PKB: The United forum of singers, directors, music composer and artists of Jeypore subdivision in Koraput District under the leadership of Renowned Musician Dhiren Mohan Pattnaik submitted an FIR against the singer, Sankar Om Sarana for making deformation of the dignity of womenhood in his song. While the FIR was submitted to Mr Arup Abhishek Behera, SDPO Jeypore, the agitation against the ill-intention of the singer Umakant was reported to have been largely visible.
It was known that a singer namely Shankar Om Sarana has not only used the language unacceptable but also displayed his poor attitude towards the girls community of Koraput District which was massively condemned by all the artists. There should be registration of modesty and humility towards the women by the singer, unitedly the artists reacted.
The song of Shanker Om Sharan has severally disgraced the dignity of our beloved sisters and daughters, an artist under the condition of anonymity, has vomited his outrage over the poor mentality of the singer. As per information received, the singer hails from Baleswar but Umakant has forgotten about the decency of our upbringing of girls community in Koraput District. Reportedly, the singer Sankar Om Sarana has reprimanded almost all the districts of Odisha. The agitation against the spirit of the song was reported to have been spreading following which the girls community of Koraput, Semiliguda had already submitted FIR against the singer Umakant. FIR against the singer was also submitted at Semiliguda police station under the stewardship of Sigdharani Mishra. Although, the nuidity with which the song was written or composed still it was not a matter of scrimmage , rather a full-fledged fight against the spirit of the song and also against those ignited the video in the YouTube.
So much vexed and disgusting were the girls community owing to the remarks against their modesty, they invited quick action against the so-called singer Umakant. The agitation campaign against the singer was marked as snowballing into assuming a bigger proposition. SDPO Jeypore was asked to decipher about the intensity of the damage of our beloved girls, sisters and mothers and their supreme self esteem, the FIR reads. During Shravan month, nobody dared to play any vulgar song here in Koraput District nor anyone tried to test our mental temperature. We live happily and peacefully allow others to live with the pious vision of brotherhood and sisterhood. So there is no scope being exploited by others. We condemned the gruesome use of language targetting our sisters and daughters.
The FIR was submitted by a vast constellation of artists like Dhiren Mohan Pattnaik, Manoj Kumar Patra, Rahul Samantray, Badal Santapatra, Himanshu Mahapatra, G. Rambabu, Sagarika Patnaik, Twinkle Mishra, Sasmita Mishra, Silpa Pani, Sagarika Mahapatra, Sanjibana Panda, Rashmi Patnaik, Basanti Jena, Minakhi Nayak, Aparna Sahu,Shreya Patnaik, Monika Patnaik, Bhagyalaxmi Achari, Krishna Chandra Hota, Swarnalata Panda, Sushanta Panda, Dibakar Patnaik, Sreekanth Dash, Jayant Dash, Piyush Patnaik, Paramjit Kaur, G. Bharati, Roja Patra, Babita Patnaik, Krishna Dash, M. Satyanarayan,Swarna Singh, Durga Sharma and many others.