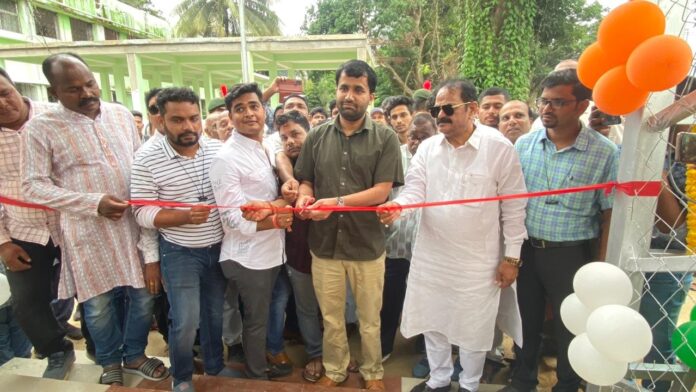 Buruea Head PKB: The foot overbridge of VD College was formally inaugurated on Saturday. This foot overbridge was a much needed requirement and demand of the college since last many years. At last, the overbridge which started for construction from 2020 , got inagurated by MLA Jeypore Mr.Taraprasad Bahinipati and Collector Koraput Mr.Abdal Akhatar in the presence of the Principal, VD College Mr. Gopal Haldar and Mr Siddharth Pattnaik, Executive Officer Jeypore municipality.
According to the information received from Executive Engineer , R & D , Mr.Bhaskar Samantray , it was a special demand of the students across Jeypore following which there was construction works of the bridge started from 2020 by R & D department and came to have a fully operational shape on Saturday with its inaguration. Moreover, Just in front of the entrance of the college, a beautiful statue of the King Vikram Dev got erected which was also garlanded by the guests present on the occasion. With an expenditure of more than one crore fifty lakhs , the much awaited foot overbridge was reported to have been completed and handed over to the college authority for operational functioning, Mr Samantray revealed to our correspondent. As the name of the Collector Koraput was not there in the name plate of the foot overbridge, there was bit whispering of criticism by many students and others along with satirical remarks about the negligence of the college authority by not inviting the chairman, Mr.Narendra Mahanty, Jeypore Municipality on this historical occasion of the college. However, the Collector Abdal Akhatar was present in the inaugural ceremony of the bridge and Vikram Dev Statue. Lots of Ex students of the college along with many people from different parts of Jeypore were present on the occasion. While expressing his views on the occasion, MLA Taraprasad Bahinipati told, “We have already sanctioned around fifty to sixty lakhs for the infrastructure development of the VD college and shortly planning to give a new look to the girls hostel with well-equipped building.” We are also helping the government women’s College jeypore with good deal of financial support and encouragement, MLA Taraprasad Bahinipati further expressed in his communication to the media personnel. It was reported that all the faculty members of the college including the NCC volunteers and ex-student leaders were present to grace the occasion.