Gajapati : A King without A Kingdom Book released 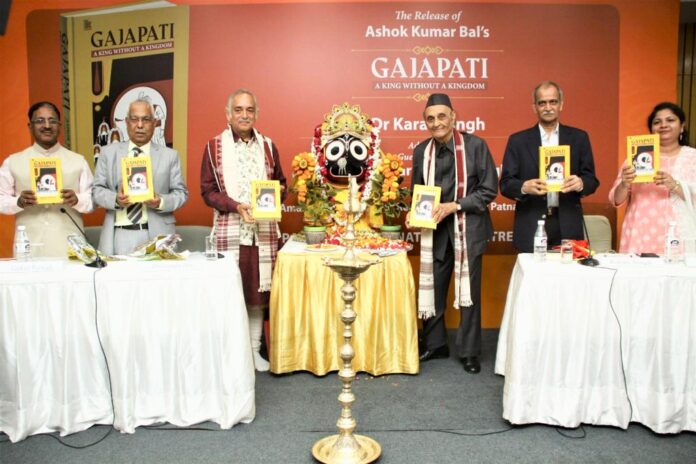 New Delhi,Dt 20.09 The first servitor (Adya Sevak) of Lord Jagannath, Gajapati doesn’t need a Kingdom on his own. As the close aide of the Lord of the Universe, the entire universe is under his spiritual governance, observed renowned scholar Dr. Karan Singh. Gracing the release ceremony of the fame book “ GAJAPATI : A KING WITHOUT A KINGDOM “ as the Chief Guest Dr. Singh mentioned that inspite of several ups and downs witnessed by Odisha, Gajapati retains his supreme stature intact and his prime position remains unaffected. Addressing the Book Launching function as Guest of honour Gajapati Maharaja Dibyasingh Deb attempted to define the proposition of Gajapati as a statecraft to legitimise the authority to rule the people as a part of divine duty. Explaining that Gajapati finds its origin in Skanda Purana, Maharaja Shri Deb advised to visualise the position in the light of the vedic culture of India where its roots lies.

Lauding the monumental, historic and contemporary significance of the Book the Guest Speaker distinguished Diplomat Amarendra Khatua outlined the role of Gajapati as gigantic in the living tradition and vibrant culture of Odisha.

Hosted jointly by the Publisher Konark Publishers and Think Tank platform Odisha Forum at India International Centre, New Delhi the release ceremony was attended by hundreds of dignitaries. Delivering his welcome speech the President of Odisha Forum Senior Bureaucrat Gokul Patnaik described the occasion as historic because of the strange coincidences of both Karan Singh and Dibyasingh Deb becoming Maharajas at the tender age of 17 and both of them sharing any stage together for the first time .

The celebrated author of Gajapati, former IRS Officer Ashok Bal gave a brief introduction and insight about the Book written in English language .
On behalf of K.P.R.Nair, MD, Konark Publishers,Jiza Joy presented vote of thanks. The Secretary of Odisha Forum, Ravi Pani conducted the proceedings of the meeting smoothly.

The 440 pages long Book Gajapati highlights the genesis, aura and evolution of this August institution adorned by the rulers of Puri since its inception. The position of Gajapati is unique and unparalleled in nature because it simultaneously connotes King as well as Chief Servant of Lord Jagannath. A well researched and delicately documented legendary masterpiece, the Book dwelled on the lives and legacies of the Gajapatis, who have occupied this coveted throne since 10th century. Being a King without Kingdom, Gajapati assumes seminal significance in Odisha. The Odishan Kingdom during the reign of Kapilendra Deb in 1435 to 1457 A.D. was at its glorious best stretching from Ganges in North to Kaveri in South. The Kingdom witnessed decline with the advent of Afghans in 1568, Marathas in 1758 and British in 1803. Though the resilience of royalty lost its lustre with the disposition of territory in the passage of time but Gajapati’s close association with Lord Jagannath continued to thrive. His symbolic sweeping of chariots with golden broom during Rath Yatra has always been putting him in highest esteem among devotees.This time tested bonding with Lord Jagannath placed Gajapati in a position of veneration among common masses, who started adoring him as living embodiment of Lord Vishnu (Chalanti Pratima ) , the Book specifies.
The prominent personalities present include Maharani Lilavati Pata Mahadei, Justice Ananga Kumar Patnaik , Justice Hrishikesh Roy, Jatin Das, Former Union Minister Bhakta Charan Das, D.P.Bagchi, A.R.Nanda, Dr. Satyananda Mishra, Satyagopal Rajguru, Ravindra Singh,Arun Panda,Manas Roy, B.K. Agarwal,Jyotsana Rai, Debjit Rath, Sarita and Jayadev Sarangi, Prasanna Dash, Tita Pattnaik, Ashok Pradhan, Dipali Pani, Adv. Sanjib Mohanty, Rabi Pradhan, Debendra Majhi, Gobardhan Dhal, Debendra Rout, Narendra Bar, Sachin Garg and Ch. Ramakant Das.