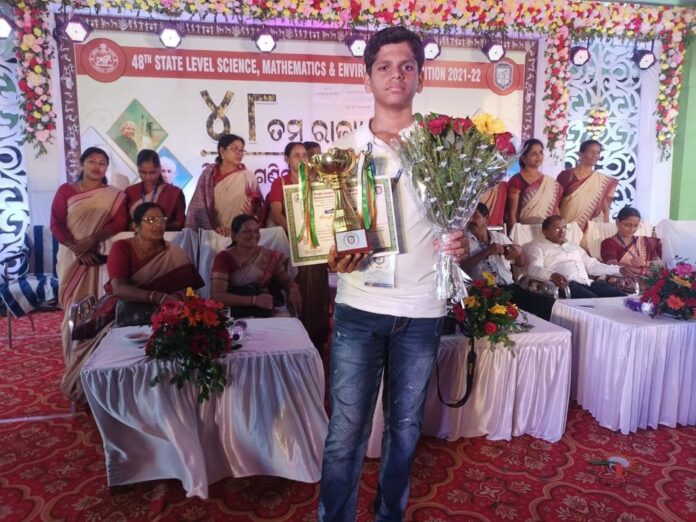 Buruea Head PKB: The class ninth student of Parabeda Saraswati Vidya Mandir , Jeypore Mr.Pratyush Mahapatra brought glory and accolades to entire Jeypore by standing first in the state level science exhibition held at Cuttack on behalf of the program Conducted by SCERT. The minister of Odisha govt Mr.Ranedrapratap Swain felicitated Mr. Pratyush Mahapatra and the science teacher of Arabinda Nagar Mr Anil Satpathy for this rare distinction of being the first in state level that paved the way for Pratyush Mahapatra to participate in the national level science exhibition at Gowhati in Assam. Congress MLA , Cuttack Md Mokim was also present on the occasion.
With the spread of this achievement, the school staff members of Saraswati Vidya Mandir including The Pradhan Guruji, Laxmikant Mishra and the grandfather of Pratyush Mahapatra, Sri Shyamaghana Mahapatra felt proud of this recognition of talent. The Parents of Pratyush Mahapatra, Mr Tapan Kumar Mahapatra , the father and mother , Dileswari Mahapatra congratulated him saying ” It is a matter of Pride to all the members of the family including his uncle Tarun Kumar Mahapatra .