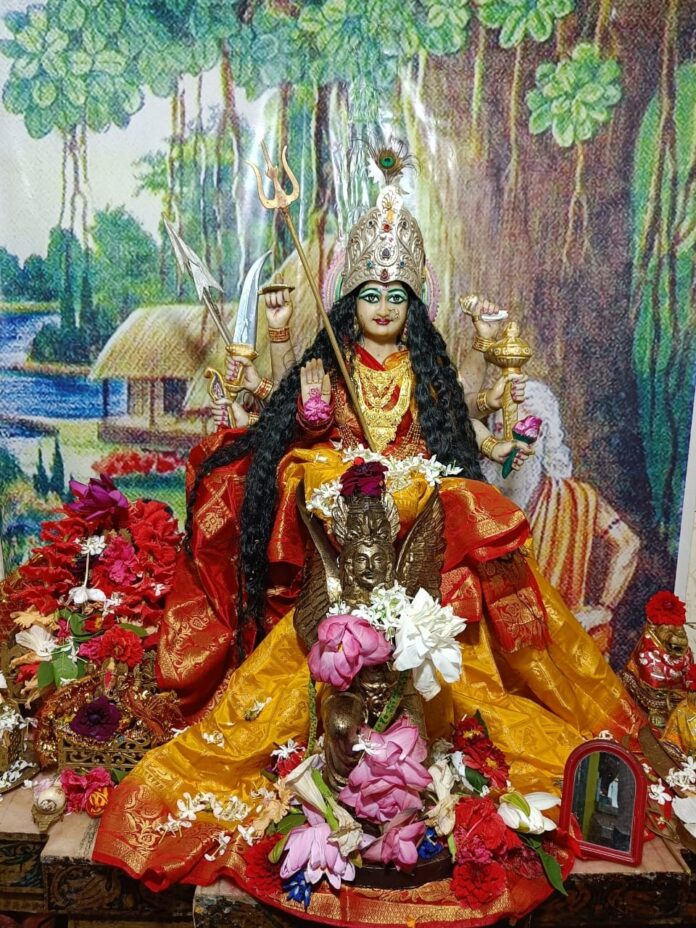 Prasanta Kumar Bishoyi Buruea: The Navaratri festival of Devi Durga is being celebrated across the country with much devotion and enthusiasm. In Jeypore subdivision of Koraput District, the Devi Lokeswari is being worshipped in the Temple located at 2nd line Lal street , Bank Colony starting from 26th of September with the pious following of rituals and practices. By the active cooperation of the priests Pandit Shree Ganesh Mishra, Sri.Kalikrushna Dash, Balaji Mishra , the performance of Navaratri of Maa Lokeswari is Conducted as per the rituals of Chandi Purana following auster discipline and devotion. As per the information received from Dr.Suresh Dash, the founder member of the temple, ” Lokeswari Temple has got the rare distinction of launching the nine forms of Devi Durga first of its kind in the township of Jeypore” We have never failed to decorate the nine incarnations of Maa Lokeswari, Dr Dash stated in devotional confidence.
According to Siddharth Padhi , one of the active members of the temple, “Mangala Arati being conducted twice daily including Homa, jagyan , Arna Prasad and other related rituals which are known to have attracted many devotees to the premises of the temple.” While speaking on the Navaratri of Maa Lokeswari, Mr.Surya Narayan Acharya , Active member of the temple stated” The most significant attraction of Navaratri Festival at Lokeswari Temple is The Worshipping of Nabakanya means “Children worship “on Nabami.( 9th day). Durga SaptaSati Chandi On Saptami creates an ambience of devotion and faith among the gathering of devotees, articulated by K. Sunil Kumar, another committee member. As per Chandi Purana, the incarnations like Sailaputri, Brahmacharini, Narasingi, Narayani, Maha Saraswati, Maha Laxmi ,Barahi, Mahakali and MahisaMardini are the incarnations of Maa Durga at Lokeswari Temple. The devotion with which every single ritual Conducted atJeypore Lokeswari Temple leaves a far reaching impression of Bhakti and incredible faith upon Maa Durga Durgati Nasini.