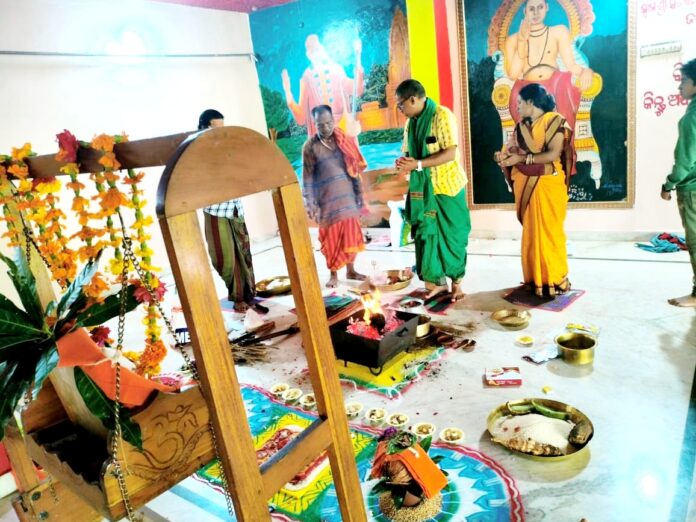 PKB Jeypore: With an atmosphere of austere devotion and enormous amount of bhakti, the Sai Temple of Souraguda conducted Viswa Kalyan Jagyan on the occasion of the Samadhi Divas of Lord SAI Baba. The temple was well decorated with flowers and lights connected around Souraguda. Sai devotees were found actively involved in chanting the name of Lord SAI. The priests of the temple Santosh Pala Laxmikant Samantra and Sagar Mishra by virtue of their holy chanting of mantras created an ambience of devotion towards SAI Baba. As per the information received from the temple sources, Mr Arun Kumar Sadangi, the founder of the temple and his beloved wife Gitanjali Pani Conducted the Puja that attracted many devotees to throng around the temple. The Viswa Kalyan Jagyan which started early in the morning continued upto the afternoon with pious devotion and Love. While the rituals of the Viswa Kalyan Jagyan was going on, devotees were witnessed chanting the name of Lord SAI. Atlast, there was Prasad Sevan for every devotee present on the occasion. Speaking to our correspondent, Mr Arun Kumar Sadangi, a staunch devotee of Lord Sai, stated ” We conduct this devotional Jagyan every year for the welfare of our beloved people and largely for their good fortunes.