Youngsters of SAIL, RSP family shine in the field of Sports 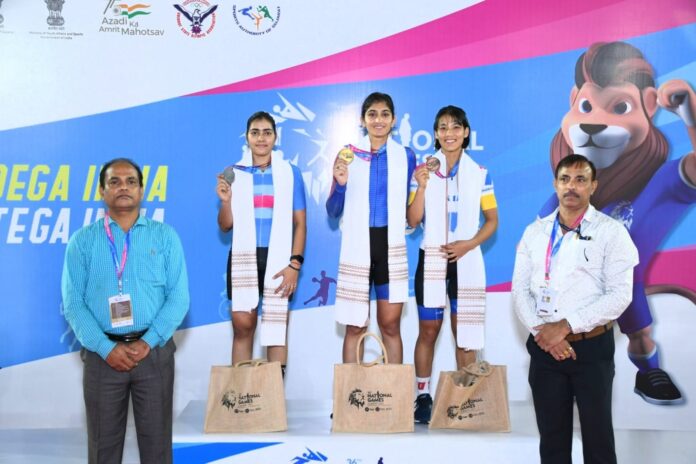 Rourkela : Two youngsters belonging to the family of SAIL, Rourkela Steel Plant (RSP) have brought laurels in not just for the Steel City but also for the entire state with their outstanding performance in the field of sports.
The Star Cyclist of RSP, Swosti Singh has bagged a silver medal in the Omnium Race event at the 36th National Games being organised in Gujarat. The cycling sensation is the daughter of Mrs. Uma Devi and Mr. Amar Singh, Senior Technician/Senior Operator of Oxygen Plant. The prodigy has excelled in cycling velodrome to bag numerous medals for the state and the country at different prestigious National and International events. It is noteworthy that Swasti is also the proud winner of the prestigious 30th Ekalabya Puraskar, for the year 2022. It is worth mentioning here that the promising youngster has learnt the nuances of Cycling at the Biju Pattnaik Hockey Stadium under the watchful eyes of Mr. Sushil Das, Cycling Coach of RSP.
Another emerging sports star of RSP family, Ashirbad Swain has been selected to represent Odisha Cricket team in the Syed Mustaq Ali Trophy slated to begin at Lucknow from 11th October. The promising wicketkeeper batsman is the son of Mrs. Lili Swain and Mr. Bikram Kumar Swain, Master Technician, Shops-Fabrication Shop of RSP. It is noteworthy that Ashirbad was the Vice Captain of the Odisha Under-19 Cricket team for the Vinoo Mankad trophy. The budding young talent of SAIL family had made national debut in the Under-16 Vijay Merchant Trophy in 2019. Known for his agility and dexterity behind the stumps as a wicket keeper, he also opens the innings and has a solid defence. He started his cricketing career under the watchful eyes of the Cricket Coaches of Rourkela Steel Plant at Ispat Stadium, Sector-6 and developed as a bright cricketer.