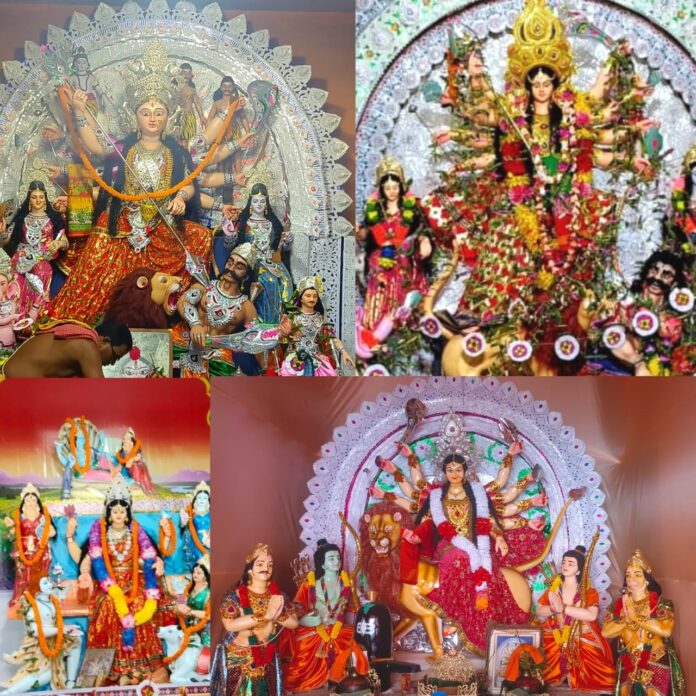 Jajpur, Pratap Prusty : For last couple of year, festivity seemed a nightmare for humans. It’s all about panick of COVID war anywhere that pushed the festivities to back foot. However, this year, Puja mania has brought forth amusement among the devotees.Like every year, this year too, the Durga Puja was auspiciously celebrated at Balipatna village in a splendid manner. Balipatna, a village in rural pocket of Rasulpur Block is well known for its Sharadiya Durga Puja celebration. Samantarapur G.P and Atalapur G.P are the two panchayat here, where goddess Durga is worshipped in five pendals in the name of Maa Rama Durga in Patana Sahi, Maa Banadurga in Dashaghara Sahi, Maa Kanak Durga in Kulugaon, Maa Annapurna in Kulugaon(2) and Maa Annapurna in Daleisahi. “Durga Puja is the only Puja in this locality which is believed to have been celebrated for last six decades irrespective of religion, race and cast”, told one anonymous devotee. The Puja ritual is begun from 6th day of Aswina Suklapaksha (Shashti) to Tenth day of Aswina Suklapaksha(Dashami or Dushera). The Goddess Puja begins from Bilwabarani when maa Durga is invited by the devotees to on board on earth and maa is bidden farewell on the Dushera day by the Kalash Yatra rituals. Aftermath the Kalash Yatra, Dandavat seva, a rarely custom of offering namaskar is a ritual observed by the people, in which a younger offers namaskar to one older. Dandavat Seva or offering namaskar is a rich heritage of sharing love and affection during the festivities is abundantly approved by the people, which is a unique feature of the Puja celebration. This year, the taste of Puja has turned pale due to the incessant rain caused by low pressure that made the pendals deserted look. “We were very excited to visit pendals, enjoying mouth watery foods, bringing balloons for our children and attending melody program, but what could we do, the rain has pushed us to stay inside”, said one lady enthusiast. “We have had community feast at our pendal for last three days, we had expected of large foot falls at our pendal but the rain washed it out”, said Sushant Prusty, one of the committee members of Rama Durga Puja committee of Patana Sahi. “The aroma of this Durga Puja has just been a blend of fun and challenge for us”, said Mr Arun Sahoo of Rama Durga Puja committee of Patana Sahi. “The idol immersion and Ravan Podi (burning of Ravan effigy) is the most exciting event is still left where higher rush of crowd is expected and we have been eagerly waiting for it”, briefed Mr Ashok Sahoo and Sunakar Sahoo. The other active members of this high profile Rama Durga Puja pendal Sri Pitabash Sahoo, Chandrakant Sahoo, Ramakanta sahoo, Prasanta prusty, Goutam sahoo, Manas sahoo, Bikram sahoo , Chinmay sahoo, Akshya sahoo, Umesh sahoo, Rabi, Ram, Deba, Tapan, Papuni, Ananda, Babuli, Jagan, Harekrishna, Jagannath, Krushna, Bubble, Balia, Bunty, Chakradhar extend their wishes for the upoming Bhasani Jatra (the idol immersion procession) which is likely to be held on 7th October at the Panchavati Cricket Ground of Balipatna.