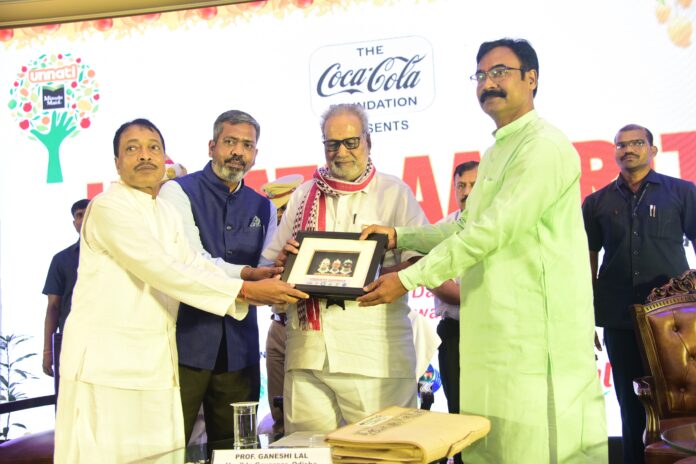 · The inauguration of Unnati Aamrit was graced by Prof. Ganeshi Lal, Honorable Governor, Odisha
· Aims at enhancing the livelihoods of mango farmers in Odisha, by promoting sustainable and high-tech agriculture practices

Bhubaneshwar (Bureau) : The Coca-Cola Foundation (TCCF)today announced the launch of ‘Unnati Aamrit’ in the state of Odisha. It is asustainable agriculture project under its flagshipprogram Project ‘Unnati’, which is part of the ‘Fruit Circular Economy’ initiative.Project Unnati Aamrit, which is funded byThe Coca-Cola Foundation has been initiatedin partnership with SWADESI, a rural development organization. Project Unnati Aamrit is in line with the Government of India’s priorities towards doubling farmers’ income.
The project was inaugurated in Bhubhaneshwar, Odisha today in the presence of Prof. Ganeshi Lal, Honorable Governor of Odisha.Mr. Sukanta Panigrahi, Project Director, SWADESI;Mr. Rajesh Ayapilla, Director, CSR and Sustainability for Coca-Cola India and Southwest Asia, along withDr. Aditya Panda, Senior Manager, Fruit Circular Economy, Coca-Cola India and South – West Asia, also attended the event with local representatives.
With the launch of ‘Unnati Aamrit’,The Coca-Cola Foundation and SWADESI aim to increase mango productivity in Odisha, through the adoption of Good Agricultural Practices (GAPs). It aims to build the farmer’s capability and skill them, withglobal best practicessuch asultra-high-density plantation (UHDP),to achieve a substantial increase in quality, productivity, and profitability per unit of land, in turn acting as a catalyst to help India in achieving self-sufficiency in mango production.The project will also significantly enhance the livelihoods and help increase the incomes of mango farmers.
Prof. Ganeshi Lal, Honorable Governor of Odisha, said, “The state of Odisha is deeply supportive of the Central government’s call foran ‘Atmanirbhar Bharat’. The Coca-Cola Foundation and SWADESI’s ‘Unnati Aamrit’ sustainable agriculture initiative will further give an impetus to self-resilience in Eastern India. The Coca-Cola Foundation’s Project Unnati has transformed the lives of farmers across 11 states in India over the past decade, and it fills me with pride that the 12th state for their interventions is Odisha. Unnati Aamrit is the first-ever ultra-high density mango demonstration project in the state, andI applaud the efforts of the two organizations towards uplifting the agri-community in Odisha.” 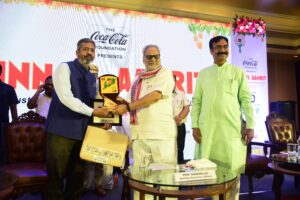 The project’s objective is to enhance incomes of marginal farmers through increased mango productivity, and rejuvenation of existing orchards in economically backward aspirational districts as earmarked by Government of India.Saadia Madsbjerg, President, The Coca-Cola Foundation, said,“Farmers are the backbone of the Indian horticulture system. At The Coca-Cola Foundation we are proud to use our resources to fund initiatives that aid in the farmers’ upliftment through Project Unnati. This financial support from The Coca-Cola Foundation helps identify, plan and support interventions in sustainable agriculture to increase farm productivity and support farmer livelihoods.”
Mr. Sukanta Panigrahi, Project Director, SWADESI, said, “With the launch of ‘Unnati Aamrit’ in partnership with The Coca-Cola Foundation,we are hoping to create a positive impact on thousands of mango farmers in the state of Odisha. We are humbled to come together with an organization of esteemed repute like The Coca-Cola Foundation, which is working for farmer communities by promoting sustainable agricultural practices. Unnati Aamrit will not only enable them with advanced horticulture solutions but also help empower them to substantially increase their incomes.”
Project Unnati Aamrit will help empower over 10,000 farmers in Odisha, spreading across 10,000 acres of land across key farming districts in the state, for the production of mangoes. The project aims to improve agricultural, economic, social & environmental sustainability by promoting good agricultural practices, and provide training to farmers to enhance capacity building on post-harvest management and market linkages.
Project Unnati aims to support the Indian agri-ecosystem by enhancing farming efficiency, strengthening forward linkages, and building food-processing capacity in the country.The project has completed a decade of successful implementation of the project in India. In the past 10 years, Project Unnati has helped empower and enable over 350,000 fruit farmers across 11 states in India, with Odisha being the twelfth.
Share
Facebook
Twitter
Pinterest
WhatsApp
Previous articlePM greets Odisha CM on his birthday
Next articleJeypore BJD celebrated 76th Birthday of Naveen Patnaik : 76 Units of blood donated on the occasion