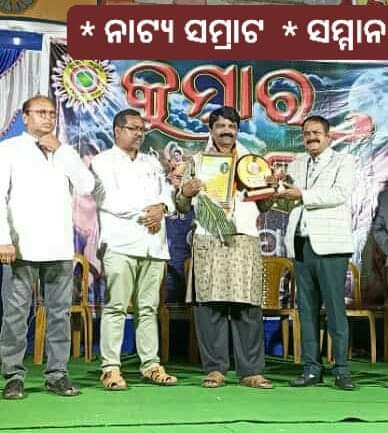 Buruea Head (PKB) : The most popular dramatic personality of Jeypore Mr.Gopal Samantray was felicitated by the local administration on the Kumara Ushab at Rajanagar square. Jeypore MLA Taraprasad Bahinipati honoured Mr Samantray for his outstanding contribution to the field of drama, one-act plays and other artistic performances. Mr. Samantray is a noted dramatist of All India Radio who has brought acclaimed recognition and glory to Jeypore owing to his skills and performance of a myriad of traditional roles even outside the district. Mr.Samantray has had the prolific reputation of playing excellent comic roles in a variety of programs with the company of his close associate Mr.Ramnath Tripathi, the founder of the HASTERUA group. Many people of Jeypore while expressing their congratulations to Mr.Samantray on his distinction of winning the “Natya Samrat– The King of Drama” demanded before the local administration for providing an open pendal for the performance of their dramatic activities. Subcollector Bedabara Pradhan and Narendra Mahanty Chairman Jeypore Municipality were present while Award for The King of Drama conferred on Mr. Samantray. Speaking to Mr.Prasanta Bishoyi, AGM, NF Times, after winning the Award, Mr Samantray revealed” The world is a stage, after our role is over , we shall go back to the original place. So we must try to play good roles without damaging the emotions of others around us because God as the most powerful spectator watching all our roles.”