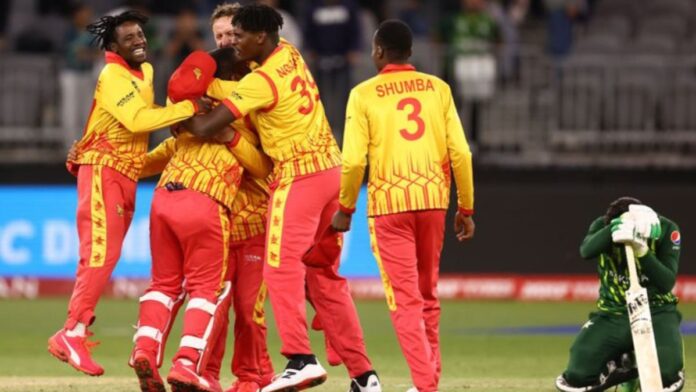 N.F Times, Pratap Prusty : Zimbabwe caused a major upset by defeating Pakistan by one run in a Group 2 match on Thursday. Chasing a target of 131, Pakistan faltered as none of their batters, barring Shan Masood (44), could score above 22. Pakistan ultimately managed 129/8 in 20 overs. Masood fought a lone battle as Sikandar Raza (3/25), Brad Evans (2/25), Blessing Muzarabani (1/18) came up with brilliant performances.
Earlier, Mohammad Wasim marked his return to the team with a four-for, while Shadab Khan bagged three wickets as Pakistan restricted Zimbabwe to 130 for eight. Wasim returned figrues of 4/24, while Shadab took 3/23 as Pakistan pegged back Zimbabwe after a strong opening stand between Craig Ervine and Wessly Madhevere. Sean Williams played a crucial cameo of 31 as Zimbabwe managed to cross the 120-run mark.
Chasing Zimbabwe, Pakistan repeatedly lost its wicket and were seemed helpless against the discipline bowling attack of Zimbabwe. Both the top order and middle order of Pakistan were looked struggling in handling pressure built by Zimbabwe led by Sikandar Raza (25/3). This is a major set back of Pakistan again that lost control over keeping pressure aside. In last 3 balls, Pakistan needed 3 runs to win, while Pakistan just managed to get 1 run and lost the match by 1 run.