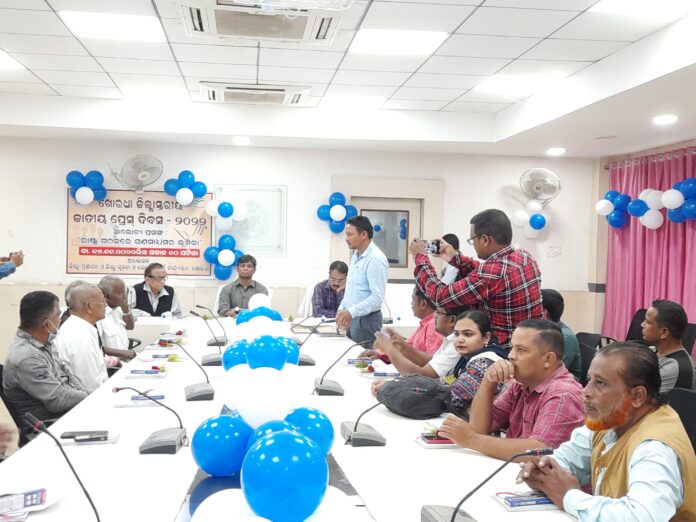 Khordha : District Level National Press Day-2022 Celebrated in the Conference Hall of Collector, Khordha. National Press Day is observed on November -16 every year to acknowledged and honour the Press Council of India(PCI). The day marks the presence of an Independent and responsible press in the country. The Press Council of India also examines the quality of page of the Indian Press and keeps a check on journalistic activities. The Chief Guest of the occasions, Collector, Khordha, K. Sudarshan Chakroborty, said that “Independent Press is often called the voice of the voiceless a connecting link between the all powerful rulers to the downtrodden ruled. It brings out the ills and malaise of the system and helps the government find the solutions to these. In the process strengthening the values of the democratic systems of governance. No wonder why it’s called one of the four pillars of a strong democracy and the only one where commoners directly participate. The other three are the Executive, Legislative and Judiciary -“a gang of select few”. The Chief Speaker of the occasions Prof.Dr.Narayan Rao discuss the theme for National Press Day -2022 is “Role of Media in Nation Building “.In a democratic country media plays a vital role in creating, moulding and reflecting public opinions. Over the years the media becomes so powerful that it soon acquired the status of “Fourth Estate “. Media can aid public involvement through advocating issues and transferring knowledge, skills and technologies to the people. Awarness about various rural development programme’s, propagation of family planning could be spread by using media.”ADM, Khordha, Manoj kumar Padhi attended the programme’s as guest of honour and said that “The special day celebrates the spirit of journalism and recognizes the dedication of journalists. It is an opportunity to celebrates the fundamental principles of press freedom across the globe defend the attack on media independence”. The senior journalists of Khordha, Uma Shankar Prasad, Iswar Chandra Mangaraj, Subhranshu Ranjan Samantaray, Lohit Narayan Mohapatra, Prabhat Kumar Panigrahi, Rama Narayan Dash and others delivered their speech. DIPRO, Khordha, Jitendriya Jena delivered the welcome speech & tender vote of thanks.