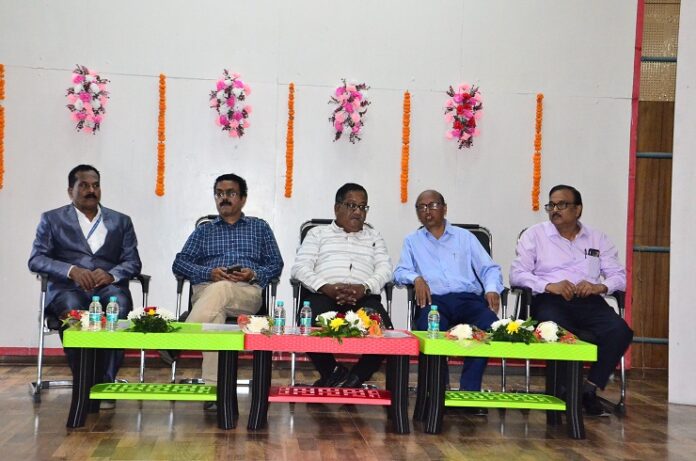 Rourkela : A function was organised at the auditorium of Ispat English Medium School, Sector – 20 on 14th November to mark Children’s Day. Mr. P K Das, GM In-charge (Town Services) was the Chief Guest while Mr. Manoj Agarwal, GM (Town Services) was the Guest of Honour. Present on the occasion were Mr. Kangar Naik, AGM (Education) and Principal (Ispat Vidya Mandir), Dr. Banamali Kar, Principal (IEMS), Mr. U C Pattnaik, Senior Manager (Education) and other Teachers of the school.
The programme commenced with lighting of ceremonial lamp and paying floral tribute at the portrait of Pandit Jawaharlal Nehru, the first Prime Minister of India whose birthday is celebrated as Children’s Day.
The dignitaries presented Steel City Best Orator Award to 45 students, 71 Best Academic Excellence Award and one Medhavi Chatra Protsahan Puraskar to the student who qualified Kishore Vaigyanik Protsahan Yojana. The students belonged to different schools of Rourkela.The programme was coordinated by the students of IEMS, Sector – 20.
A fruit distribution programme was also organised at the Pediatric ward of Ispat General Hospital. Mrs. Hiranmayee Satapathy and Mrs. Samapika Sahoo, both Vice Presidents of Deepika Mahila Sanghati, presented fruits to the children admitted in the ward in the presence of Dr. B K Hota, ED (M&HS). Also present on the occasion were Dr. N P Sahoo, CMO (M&HS), Dr. Jayant Acharya, Additional (CMO) and HOD (Paediatrics), Ms. Namita Mohapatra, Secretary (DMS) and other members of the Executive body of Deepika Mahila Sanghati, doctors, nurses and DNB students. Prizes were given to the children of the Paediatric ward who won the colouring competition held in the ward.
Earlier to mark the Children’s Day, a Paediatric ICU Protocol Book according to the latest National guidelines was released by Dr. B K Hota. ED (M&HS). The SOP to be followed in ICU (Paediatric) in all cases was prepared by the team of Doctors of Paediatric ward under the guidance of Dr. Jayant Acharya. In addition to this Dr. Hota also handed over the certificates to 4 Vacational trainees under the CSR scheme, who have successfully completed their Paediatric Critical Care Training.