NEW DELHI: Japanese two-wheeler maker Yamaha is conducting deep research to launch electric vehicles (EVs) in India, as more legacy players are gearing up to meet the growing demand for battery-run vehicles.
Yamaha’s first EV in India is likely to be based on the same platform used by the Neo’s electric scooter that was launched in Europe earlier this year. According to a senior executive, there is a need to rework the same to make it suitable for Indian conditions.
Unlike most manufacturers that claim to manufacture their EVs in India, Yamaha said that they plan to assemble their maiden electric vehicles in India by using Indian suppliers, even for things such as mechatronic systems, to achieve an accessible price for the cost-sensitive market.
“Yamaha understands the potential of EVs in the Indian market and is carrying out detailed research in this area covering several factors like pricing, performance, safety related to batteries, power supply and battery charging/swappable battery infrastructure,” Ravinder Singh, senior vice president, of sales and marketing, at Yamaha Motor India, told TNIE in an interview. e-2W sales in India grew manifold to 231,338 units in FY22 from 41,046 units in FY21, according to industry data. Sales of the same hit an all-time high in October 2022 at over 75,000 units, up 30% year-on-year, according to the government’s website Vahan which tracks vehicle registrations.
At present, the e-2W industry is dominated by new-age players such as Ola Electric, Okinawa and Ather Energy. Among legacy players and Yamaha’s competitors- Bajaj Auto and TVS- have a running EV in the market while Hero MotoCorp recently introduced its Vida V1 electric scooter. 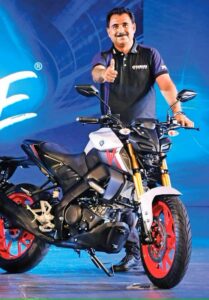 When asked about Yamaha’s sales amidst a prolonged slowdown in the overall two-wheeler market, Singh said that they plan to achieve domestic sales of 5.5 lakh units in 2022, of which they have achieved 90% by the end of October.In 2019, Yamaha, which sells the popular R15, MT-15 and FZ range of motorcycles, had sold 6.2 lakh units in the domestic market whereas, in 2020 and 2021, its sales stood at more than 5 lakh units.“Yamaha witnessed a dip in demand in the first quarter of the calendar year 2022 but in the second and third quarters, the company posted YoY growth of 100% and 11%, which is quite encouraging,” said Singh, who is confident of healthy sales figures in coming months.
Share
Facebook
Twitter
Pinterest
WhatsApp
Previous article5T Secretary Visit’s Maa Bhagabati & Ugratara Temple : Master Plan for Holistic Development of Both Shrines Soon
Next articleSargiphula Program at Khairaput Block, Malkangi, ST: HSSSD, Govindapaly excelled