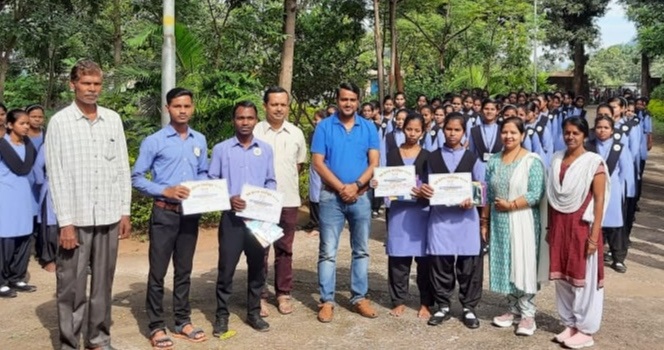 Buruea Head ( PKB): There is absolutely no dearth to the inherent potentiality of our tribal students. As and when they are provided the condusive platform for making exhibition of their inner hidden talents, they have never failed to capture the attention of one and all. The organisation of “Sargiphula” in the tribal dominated district of Malkangiri aims at boosting the talents of our beloved tribal students. The government of Odisha under the leadership of Naveen Patnaik has understood the conception very well that the real development of tribal students is a reflection of positive progress of our society. The Idea of organising “Sargiphula” has provided wide-ranging exposure to the students of different tribal schools not only to make them exhibit the heap of talents preserved within them but also make them capable to stand equally in competition with others. “The Sargiphula 2022″ has been going on in different block levels across the state inviting the tribal students of all the SC and ST schools and provide them an appreciable platform for doing performances in dance, song, debate, essay and Quiz competitions. These competitions mount up the confidence of the students which is being admired by many people across the state of Odisha.
The Kharaput Block of Malkangiri District on Monday was reported to have organised the block level competitions among 16 SC and ST schools of the same block where around 150 students participated. The students belonging to Govt SSD Higher Secondary School, Govindappaly were known to have stood outstanding in their performances. According to the information received from the Principal of Govt SSD Higher Secondary School , Govindapaly, Mr. Ashok Kumar Swarnakar, ” I truly feel proud of my beloved students whom I encouraged for participation and they did excellent in their performances” Puspa Pujari begged first in slogan and Second in debate competition, Raghunath Halwa received second prize in Quiz, Krishna Madkami got second prize in song competition as proudly reported by the Principal. The dignitaries present on the occasion were MLA, Purna Chandra Baka, Chairman, Kharaput Block, Bhighna Kirsani, Chairman, Matheli, Mahesh Baka, BDO, Hruda Ranjan Sahu , WEO, Kharaput, Janana Behera and many others. All the staff members of the school congratulated the students after the prayers today who brought glory to the school. The winners would participate in the district level and then the state level as being reported by Mr Swarnakar, the Principal of the school.