Archana Nag says she will expose everyone 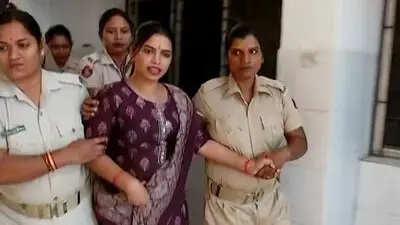 BHUBANESWAR: Archana Nag, prime accused in the sex and extortion scandal, on Tuesday dropped a bombshell claiming she has evidence against a lot of people and will disclose details at an appropriate time.“I just need time. I have all the evidence. I have been framed and will prove it,” said the 26-year-old whose arrest had opened a can of worms with political leaders from various political parties, officers and businessmen dragged into the scandal.
Archana, who was taken for medical examination before her remand to Enforcement Directorate (ED), told mediapersons she has been framed.“Bhubaneswar Police arrested me in a hush hush manner. Was I a terrorist? Why was there no press meet to announce my arrest?” she asked.
She said details of the case from the time her associate Shradhanjali Behera first went to Laxmi Sagar police station to lodge a complaint in September till an FIR was registered at Khandagiri police station must be analysed.
Archana’s hint at a well-managed conspiracy stems from the fact that Shradhanjali had first lodged a complaint with Laxmi Sagar police station alleging sexual exploitation by an Odia filmmaker. Days later, the filmmaker filed a case of extortion and criminal intimidation against Shradhanjali and Archana. No police action was taken till then.
However, a few days later, Shradhanjali lodged an FIR with Khandagiri police accusing Archana and two others of extorting many people by way of blackmail.Soon Bhubaneswar Police swung into action and arrested Archana on October 6. The matter remained under wraps till media wind of it. Soon, photographs of prominent persons with Archana made rounds and all kinds of conspiracy theories came to float.
Meanwhile, ED which secured her remand began interrogation on Tuesday in connection with the money laundering case registered against her and three others.ED sources said Archana reached the central agency’s headquarters after 12 noon and her interrogation continued till over 8 pm.
“Financial transactions of more than Rs 2 crore have been traced in the bank accounts of Archana and her husband Jagabandhu Chand in the last four to five years. She will be questioned about all these transactions,” said ED sources.