The Speech of Shitilagna at Parliament brought glory to Odisha, a student of KV, Koraput 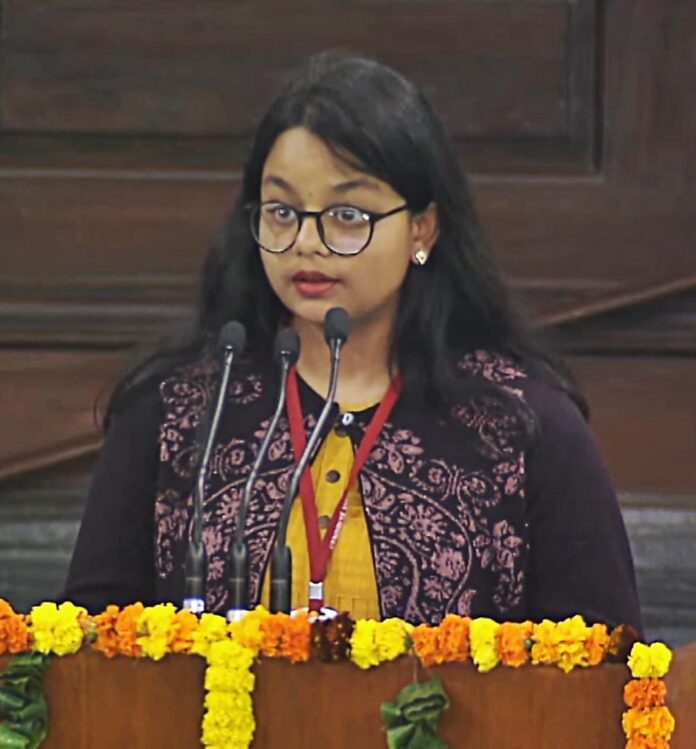 Buruea Head ( PKB): Shitilagna Satpathy, a class 10th student of Kendriya Vidyalaya, Koraput brought unprecedented and tremendous amount of glory not only to undivided Koraput District but also made the entire state of odisha feel extremely proud of her achievement. While addressing to the dignitaries of the temple of our constitution, the Parliament of our country, Shitilagna captured the attention of the August House by virtue of her brief description in English on the life and contributions of the First President of our nation Dr.Rajendra Prasad.
Sitilagna became the only representative from odisha who was selected by the Regional Centre of KV, Bhubaneswar to participate on the occasion of a program called” Know Your Parliament” being organised by NCERT, New Delhi in collaboration with the constitute Assembly of our Parliament. This auspicious program being called “PRIDE”
offered the previledge to only thirteen out of total 27 students across India to deliver the speech in the central Hall of our Parliament on the occasion of the 130th birth anniversary of the prolific hero and the first President of India Dr.Rajendra Prasad. The invited guests present on the occasion became elated to have their blessings on this KV Koraput student Shitilagna Satpathy. Everyone who paid attention to her delivery of speech could control themselves without expressing their feelings of love, affection and devotional reverence upon this student who hails from the tribal dominated koraput district.
As soon as this achievement of Shitilagna spread the horizon of Koraput, thousand of people stood up in their toes to congratulate the humility and brilliance of this class tenth student of KV Koraput. While making the land of odisha feel proud, the staff members, teaching fraternity and the Principal of Kendriya Vidyalaya Koraput Sri.Arobindo Biswal congratulated the Pride of The school Setilagna Satpathy , the proud daughter of the proud father Sri.Rabi Satpathy,a noted poet and famous writer. It was known that Shitilagna Satpathy while participating in the Road Safety Awareness Program and her acting in Regional short films , She was adjudicated the best achiever drawing the attention of one and all. There is a wide road ahead for her to achieve more laurels for our mother land as being humbly stated by Mr Rabi Satpathy.