Buruea Head (PKB): The seven-day NSS camp held at the outskirt of Jeypore subdivision in Koraput District of Odisha concluded. The organisation of the camp consisting of fifty students of Jeypore women’s college along with the stewardship and active leadership of the programme Officer Dr.Manoranjan Pradhan, Lecturer in education, left a remarkable impression inside the selected village. 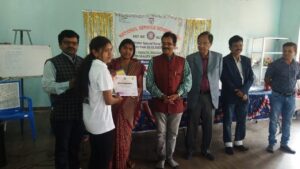 During the short span of seven days while the camp was going on by the active cooperation of fifty number of volunteers made the entire village involved to be aware about the benefits of remaining hygiene and also the growing significance of literacy. In the first session, the volunteers visiting door to door of the village were teaching alphabet, signatures and also preaching them not to go for open defecation. As Swachha Bharat Abhiyan has already caught the attention of the entire country, the volunteers took classes on the necessity of remaining neat and clean. Encouraging the villagers for participation in plantation drive would stop soil erosion was reported to have been taught by the girl volunteers. The hard consequences of narcotics consumption and the negative impact of drinking liquors were extensively discussed with the villagers by the volunteers.

In the second half after launch, the volunteers were advised by many administrative officers, educationists and social activists. The program was concluded with all disciplines as being reported.