Workshop on ‘Gender Sensitive Reporting and Writing’ organized for scribes 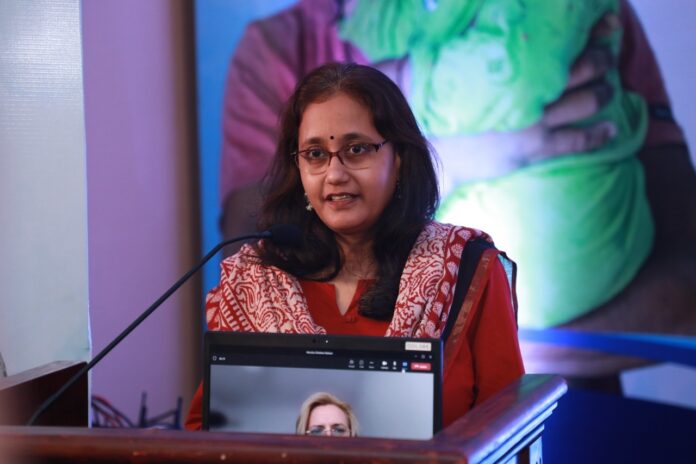 • More than 120 journalists attended the workshop to break the bias in gender stereotyping in media
• Journalists discuss and learn ways to promote equal representation of women in media
Bhubaneswar (Bureau) : With an aim to promote equal and sensitive representation of gender in the media UNICEF Odisha organized a workshop on Gender Sensitive Reporting and Writing for journalists in Odisha today. At the outset of this workshop, Ms. Radhika Srivastava, Communication and Advocacy Specialist, UNICEF, Odisha gave the welcome address and set up the context. Dr Monika Nielsen, Chief of Field Office, UNICEF Odisha also addressed the media and spoke of UNICEF’s commitment to gender equality. Ms. Madhuri Das, Gender Specialist, UNICEF, Delhi delivered key notes on becoming more gender sensitive. Ms. Kasturi Ray, Senior News Editor, The New Indian Express moderated the entire workshop.
The workshop started with an informal discussion on what the reporters/ journalists expect from this event. According to global data presented at the workshop, only 23% content in the media related to women while less than half of stories were reported by women. Data also showed that among spokesperson’s quoted, only 19% were women . A checklist for media was presented at the workshop, giving tips to journalists on how they can make their stories more gender sensitive, challenge social norms and ensures that voices of women are equally heard. Legislations such as The Indecent Representation of Women (Prohibition) Act, 1986 exists to prohibit indecent portrayal of women through advertisements, publications, writings, paintings etc.
The check list also includes gender sensitive methods on reporting on crime against women and emphasizes on publishing follow up stories to write on the issue even as the focus is on the crime survivor. The participants discussed the various challenges and barriers they face within their workspace and in the external environment related to gender sensitive reporting, especially since most women do not make it to decision making positions within media organisations.
Addressing the media Dr Monika Nielsen, Chief of Field Office, UNICEF Odisha said, “Gender equality is essential to realizing the mandate of UNICEF to uphold the rights of all children. Gender norms harm both girls and boys. Harmful practices such as child marriage, exploitation, child labour are often a result of behaviours and practices stemming from gender norms. As we recover from the pandemic, it is a critical time to discuss Gender equality, shifting power relations between genders and addressing discriminatory norms and gendered barriers.
Speaking on the role of media on gender, Ms. Srivastava said, “Media plays a crucial role on changing mindsets and perceptions .and a gender sensitive media can promote greater gender equality and challenge patriarchal system of our society.” She urged media houses to include sources who are women and are able to provide a woman’s perspective while ensuring equal representation from women. She said it is important to explore an issue from a woman’s perspective, and report on how women are impacted by it. This is especially important during disasters which Odisha so often faces, she said.
Ms. Das explained the various stages of gender equality. She said, “Gender must be considered at all levels of news production: from the editorial department where decisions are made about what stories to cover, to the field where stories are gathered, to the final publication of the story with headlines and visuals. Our goal is to create a gender equal society and in this the media can play a very constructive role. Charity begins at home. So as a media house, all need to be very mindful of the impact of gender sensitive reporting. Media houses should not do something just for the sake of sensation and high earned TRPs.”
During this workshop, a group activity was also conducted among the scribes present in the house. The working journalists shared their thoughts and challenges in gender stereotype reporting and writing. The participants were felicitated with participation certificates.