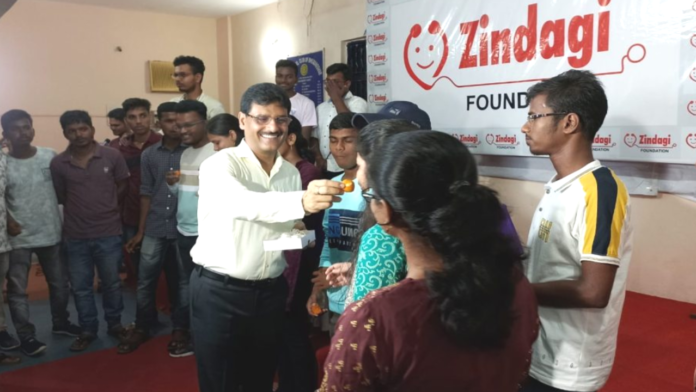 With students all over celebrating the success of NEET, emotions run high at Zindagi Foundation as it is filled with both joy and tears. It is a matter of happiness that students get result of years of hard-work and tears come out automatically as students are overwhelmed by this success in adverse situations. The success of students of Zindagi Foundation is no ordinary success as most of these children are such that they do not even get two square meals every day. Children of rickshaw pullers, daily wage labourers, vegetable vendors and poor farmers make many inspiring stories when they succeed in NEET, one of the toughest examinations in the country.Amrita Sahu’s father is a daily wage laborer from Jajpur district of Odisha and even after seeing her daughter’s talent, he could not arrange medical coaching for her. It was difficult to even maintain the family. In this situation, Zindagi Foundation took full responsibility of her preparation of NEET. Amrita has made her way to a reputed medical college by scoring 636 in NEET.Jagannath Giri of Kendrapara district of Odisha has taken steps towards his dream of becoming a doctor by scoring 635 in NEET. Jagannath’s father is a landless farmer and also works as a daily wage laborer to run the family. Sometimes the family has to sleep without having food. Jagannath also sometimes works in the fields along with his father to earn some extra money for family. With the guidance and hard work of Zindagi Foundation, Jagannath has made his dream come true by defeating poverty.The story of Malay Kumar Pradhan of Dhenkanal is also similar. The hunger for success of son of a daily wage labourer, struggling to get food every day, defeated the hunger of stomach. Medical coaching was like a dream when it was a challenge to get square meal every day. But Malay never gave up chasing his goal. By scoring 634 in NEET, Malay has achieved a great success and has taken step towards becoming a doctor.20 out of 21 students of Zindagi Foundation have qualified in NEET 2022 and are on their way to become doctors. Starting from 2017-18, so far 90 students of Zindagi Foundation have qualified for NEET. All these students come from the poorest and most backward sections of the society, whose families are barely able to survive.Zindagi Foundation provides NEET coaching, study material, accommodation and all other facilities absolutely free of cost to these children. On completion of 5 years of its success in 2021-22, Zindagi Foundation is now preparing to spread outside Odisha and children from other states will also now be able to prepare for NEET under this foundation.Zindagi Foundation was conceived by educationist Ajay Bahadur Singh, better known as Ajay Sir among students. Ajay Sir himself wanted to become doctor and was preparing for medical entrance. But due to his father’s illness, Ajay Sir had to leave his studies mid ways and he started earning money by selling tea and sharbat for his father’s treatment. With his hard work and dedication, when Ajay Sir succeeded in life as an educationist, he resolved to make meritorious and poor children like himself doctors and founded the Zindagi Foundation.Talking about the consistent success of his foundation, Ajay Sir says, “these children have the urge to win in life and I try to convert this stubbornness into success. Once upon a time my life started with selling tea and sharbat. Today, when I am capable, I try that due to lack of money, the dream of becoming a doctor of a meritorious child should not remain incomplete as I had to leave studies mid ways. I see my success in the success of these students”.