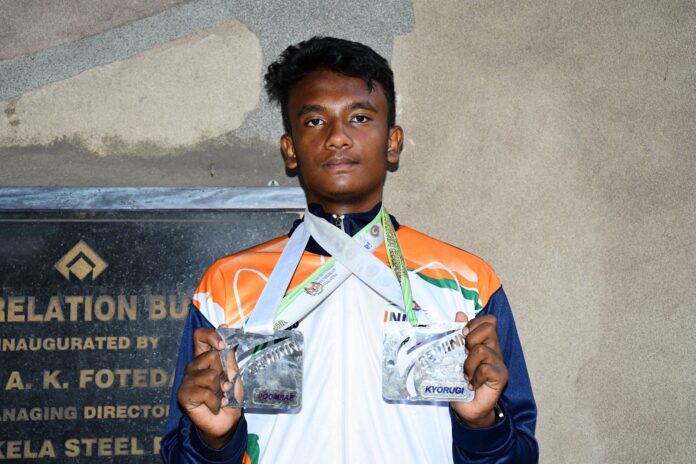 Rourkela(11-09-22) : 15 -year- old Aman Munda, son of Mr. Sagar Munda ,from SMS-2 Department of SAIL,Rourkela Steel Plant (RSP) has brought laurels to the country by bagging two silver medals in the 5th Gewinn Unimap Malaysia international open Taekwondo championship 2022 held in Malaysia. Around 200 participants from 12 countries took part in this championship including Nepal, Brazil, Japan, Singapore, and Thailand.
Earlier, he had fought 6 rounds in the event in which he defeated his opponents and reached the final Round. But the young Taekwondo player lost his final bout with a Malaysian player and thus won a silver medal to his name. He won another silver for Fight and poomsae – it is a defined pattern of defense-and-attack motions.
These Patterns are a set sequence of movements that consists of the various fundamental stances, blocks, punches and kicks logically arranged in a meaningful order in response to attacks from multiple assailants.
“There are no bounds to my happiness after winning the silver medal for my country, and making my city Rourkela proud. I have learnt from my mistakes and am now aiming at bagging medals in the World Unimap, as well as in upcoming Asian games,” says Aman.
His coach Mr. Anand Kumar Suna says, “His hard work makes Aman different. I am sure he will be winning many more laurels for the country.” It is noteworthy that another youngster, Soumya Ranjan Mohanty, who is also a student of Mr. Suna has bagged two Bronze medals in the same championship.
Aman is currently studying in 9th standard at DAV School, Sector-16. His Taekwondo journey began when he was just 10. As he proceeded, his interest in Taekwondo became his passion. He has already bagged 3 Gold medals in the National taekwondo championship held in Madhya Pradesh, in 2021.