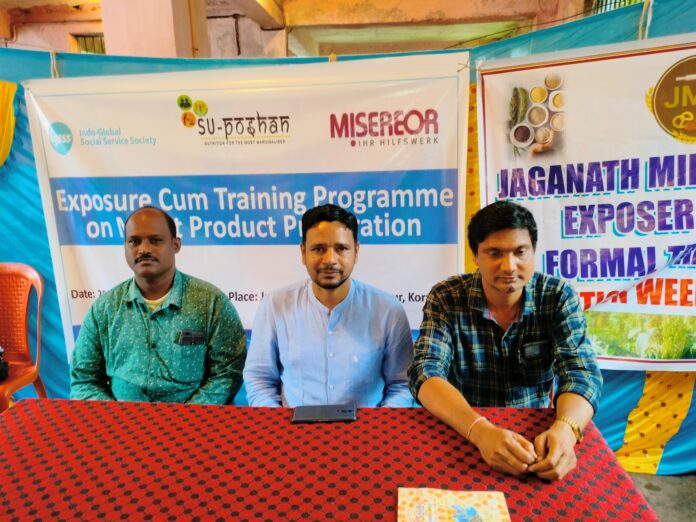 Buruea Chief PKB: Malnutrition can lead to a galaxy of health disorders including stunted growth, eye problems, diabetes and heart diseases. In order to facilitate the deficiency of nutrition, a good knowledge about the intake of millets is requirement of the time. Undivided Koraput District can be considered the hub of millets production but the knowledge required for obtaining the benefits of millets production and its related consumption has been found confined within a finger-counted population following which different awareness programs are being conducted. The Indo-Global Social Service Society (IGSSS) conducts awareness program as well as training in connection with the production of millets and its preparation in twenty two states across the country and eight districts of odisha.
On Tuesday morning, the IGSSS organised a program on Millets products preparation through the project name ” Su-Poshan” in the premises of bariniput lord Shiva Temple at Jeypore. According to the information received from Mr.Janmejay Rout, the Senior Rural Mobilizer ” the nutritional supplements are helping people to meet the issues of malnutrition through millets production and its related consumption. The Dasmantpur block in Koraput District have been inducted into the training program in which five grampanchayats of same block were imparted the training program in order to create awareness among the people. Two members of each group of the Dasmantpur block were seen actively involved in receiving the training program following which they could not only learn the importance of millets production and its far-reaching positive impact on health but at the same time, they could disseminate this message among their brothers, sisters and villagers, Mr.Rout highlighted.
On the occasion of training program on Millets products preparation through Su-Poshan, Mr.Tapas Chandra Ray, Deputy Project Director, ATMA, Koraput, joining as a Guest of Honour, stated that Malnutrition could be very harmful to our health systems, thus, the consumption of millets on regular basis should not be neglected. Govt of our state encourages with good deal of financial services for the benefits of millets production and its related consumption. This particular product would not only reduce the severity of malnutrition but also make people to be self-reliant in future. Gradually, people belonging to Koraput District have started taking steps for improving the quality of their lives being dependent upon millets. Nowadays, government of odisha provides a wide range of exposure program on Millets products preparation, Mr.Ray categorically stated. Mr.Jagarnath Chinary who won appreciation recently joined as Resource Person on the training program including the producer group members of operational areas and nutritional volunteers. It was an excellent and dynamic program which gave a great deal of exposure on Millets products preparation through Su-Poshan to many people present on the occasion.