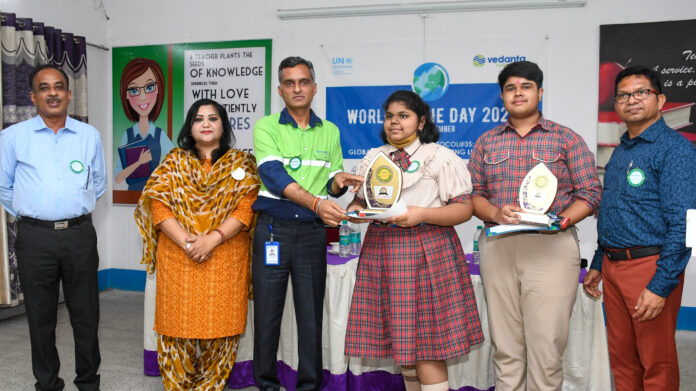 Jharsuguda : On World Ozone Day, Vedanta Aluminium, India’s largest producer of aluminium, conducted an awareness campaign for students at Jharsuguda, in association with the Regional Office of Odisha State Pollution Control Board (OSPCB), and DAV Public School, Jharsuguda. The campaign was aimed at sensitizing the students on ozone depletion, its impact on the climate and individual responsibility, aligned to this year’s theme of ‘Montreal Protocol@35: Global Cooperation Protecting Life on Earth’. Er. HK Nayak, Regional Officer of OSPCB, Jharsuguda, graced the occasion along with deputy environment scientists Mr. AK Bhoi and Ms. Anusha Ekka. Mr. Prashant Kumar Panda, Principal of DAV Public School, Jharsuguda, and Ms. Anjali Machhkhand, District Session Judge, Women’s Court, Jaipur were also present on the occasion.
The company also conducted various awareness drives across its operations in the subsequent days that reached out to hundreds of employees and business partners, reiterating the company’s commitment to decarbonization of its operations in the long run. As part of the campaign, employees and business partners took a climate action pledge and were sensitized on ways to reduce carbon footprint at the operations to preserve the ozone layer.
Speaking about the company’s climate action endeavours, Mr. Sunil Gupta, CEO – Vedanta Limited, Jharsuguda, said, “At Vedanta Jharsuguda, our approach to climate action includes both transitioning to low-carbon operations and phasing out ozone depleting substances. This strategy also sees us operate our plants at high levels of operational efficiencies, increase quantum of renewables in our energy mix, transition to cleaner fuels from fossil fuels, and increase green cover in & around our plant. As one of the world’s largest aluminium smelters, we are determined to pave the way in sustainable development. Testimony to our endeavours, in FY22, Vedanta Jharsuguda substantially reduced its GHG or greenhouse gas emissions intensity by around 12% over the previous fiscal, while increasing production volume by 20%.”
Speaking on the awareness drive, Er. H K Nayak, Regional Officer of Odisha State Pollution Control Board, Jharsuguda said, “Many ozone-depleting substances warm the climate, causing climate change. Through this awareness campaign with students and Vedanta employees, we wanted to reiterate the importance of the ozone layer for living beings and the need to take urgent action in this regard, in accordance with the Montreal Protocol. I commend Vedanta Aluminium for partnering with us and sensitizing the student community in Jharsuguda on Ozone Layer Protection & climate action. We hope that our initiative can contribute towards moulding them as eco-conscious citizens of tomorrow.”
The past year has seen Vedanta Aluminium’s Jharsuguda plant significantly increase its focus on climate action. Highlights include:
•Vedanta Aluminium is the first from India to launch low carbon ‘green’ aluminium, branded Restora, whose carbon footprint is nearly half of the global threshold of 4 tonnes of CO2 equivalent per tonne of aluminium for low carbon aluminium
•Vedanta Jharsuguda is India’s leading consumer of renewable energy, at nearly 3 billion units in FY22
•Energy conservation initiatives resulted in savings of more than 18 lakh Giga Joules last year
•Vedanta Jharsuguda’s Smelter-I is a national benchmark in specific water consumption (SPC) amongst aluminium smelters in India. Lower SPC indicates less amount of water required to produce 1 tonne of aluminium.
•The company has commissioned India’s largest fleet of electric forklifts powered by lithium-ion batteries
•The company has expanded its existing carbon sink with plantation of 3.92 lakh more saplings in FY22
Vedanta Aluminium, a business of Vedanta Limited, is India’s largest producer of aluminium, manufacturing more than half of India’s aluminium i.e., 2.26 million tonnes in FY22. Vedanta Aluminium ranks 4th in the Dow Jones Sustainability Index (DJSI) 2021 world rankings for aluminium industry, a reflection of its sustainable development practices. The company operates a world-class 1.75 MTPA aluminium smelter and 3615 MW thermal power generation facility at Jharsuguda, in Odisha. The only Indian smelter in the global ‘1 Million Tonne’ production and export club, Vedanta Jharsuguda is a leader in value-added aluminium products that find critical applications across core industries. With its state-of-the-art facilities, unparalleled engineering prowess, R&D and innovation abilities, the company is working towards a sustainable and greener future for all by spurring emerging applications of aluminium, the ‘Metal of the Future’.