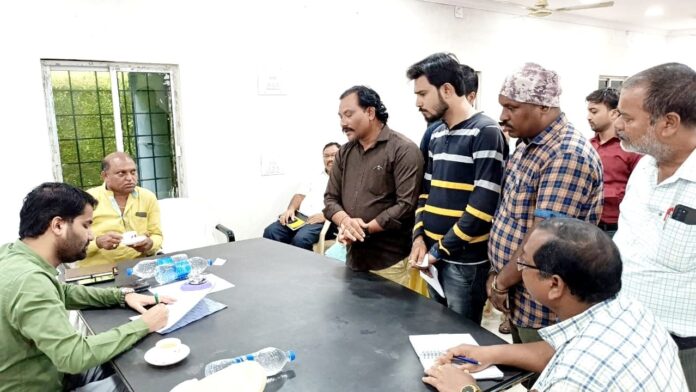 Buruea Head PKB: As many as sixty four cases of grievances of the people of Jeypore subdivision in Koraput District was on Monday reported to have been heard by the district collector Mr.Abdal M. Akhatar . Out of the sixty four grievances taken for consideration, fifty six were of individual cases and the remaining eight were of collective in nature as stated by the SDPRO, Jeypore. As per the scheduled time , the grievances pertaining to land dispute, patta issues, water supply, health services, transfer , Prime Minister Abas Jojana , provision of stalls near Tahasil office, etc have been enlisted as hearing.
Sahajya, the Helping Hands, a renowned social organisation of Koraput District placed a demand before the district magistrate Mr.Abdal Akhatar about the opening of Ahara Services even on Sunday inside the district headquarters hospital with their logical reasoning that patients alongwith their relatives do come for treatment on Sunday and facing difficulties. Another collective grievance Hearing relating to the police action against the singer Umakant was reported to have been enlisted as hearing . Koraput SP Varun Gunthapalli, PD , DRDA, Gourav Shivaji, Subcollector Bedabara Pradhan, Narendra Mahanty, Chairman Jeypore Municipality, EO, Siddharth Pattnaik, Tahasildar Pradhan Tully Amma, BDO, Suraj Patnaik, ABDO , Staff members of TPSODL, Agriculture and Police officers of the town were present.