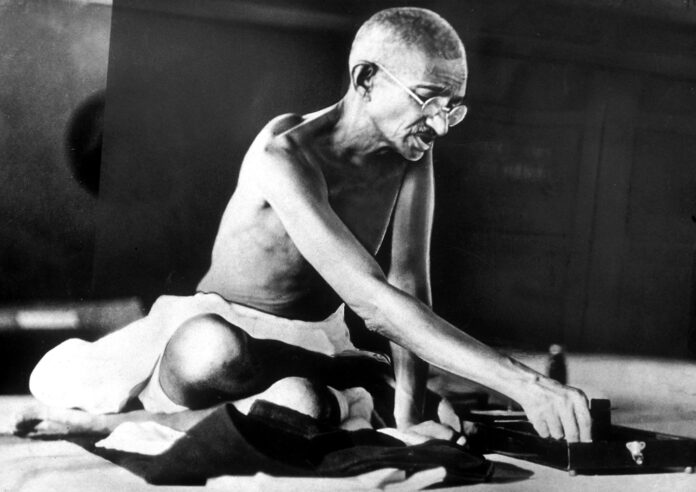 Everyone claims to be a Gandhian these days. Mahatma Gandhi never imagined that he will be made a saleable commodity across the country ! Gandhi (as an idea & as an individual) is India’s biggest soft power.

The most revered of world leaders is also admired by the masses across continents. The esteemed global icon continues to inspire people worldwide through his soft leadership.

Much before the Harvard Professor Joseph Nye coined the term “soft power”, Gandhi stated “Power is of two kinds. One is obtained by the fear of punishment and the other by acts of love. Power based on love is a thousand times more effective and permanent than the one derived from fear of punishment.”

“In a gentle way,” said Gandhi, “you can shake the world”. The kind of power the Mahatma exercised was obviously soft power. The apostle of peace proved the world that there is strength in being soft.

This half-naked fakir in human history has shown that soft power can sometimes be more powerful than hard power. His consistent strive towards unity based on the message that in a society, differences ought not to be divisions has made him a common talisman across different identities. Gandhi’s contribution to human history was global in scope, rather than just national.

Contemporary world needs another leader like Gandhi to preach and practice peace and non-violence, to spread universal brotherhood and harmony. He cared, above all, for human compassion, empathy and self-reflectivity.

In 2019, on the commemoration of Gandhi’s 150th-year birth celebration, many Indians observed his birth anniversary with genuine enthusiasm and reverence and the Mahatma was everywhere in India. In the same year, the United Nations at its 74th session celebrated Gandhi as a symbolism and a high-level dialogue, attended by Prime Minister Modi, dedicated to exploring “Gandhi’s relevance in the contemporary world”.

When the Indian Prime Minister draws on Gandhi’s universal image abroad or writes an opinion piece for The New York Times calling on the world to learn from Gandhi’s teachings; it symbolizes the power of brand Gandhi. He was not only the most prolific of modern thinkers but also the most relevant, even after a century.

Gandhi continues to inspire, and offer a vision of India for the future; of a secular country without religious, caste, class or gender inequalities, where labour rather than capital would be valued wisely, and where morality in all actions should be the motto.

Today there are statues of Gandhi in almost every country of the world, and courses on him are taught in universities and colleges worldwide. The Fakir who wore little and ate even less influenced the citizens and leaders across the globe and remains India’s national identity in front of the world. There can be no better cultural-spiritual ambassador of India than Gandhi.

As stated by Einstein on the Mahatma “Generations to come will scarce believe that such a one as this ever in flesh and blood walked upon this earth.”

There is no alternative to Gandhi, not even after 153 years of his birth; as Gandhi is only once in history. Gandhiji was the one and only acceptable person for all Indians a century ago,he still maintains that position.

Time has changed, his philosophy has been crushed by vested interest politicians yesterday and today, too,but he remains the same.All in this country have forgotten him and made him a photograph.

Every year, on 2nd October, Sanghis make it a point to project Nathuram Godse as number one trend. Shamelessly, BJP supporters and Sanghis hail the killer of Mahatma Gandhi as their hero.

We all know, they killed Gandhi as they hate Gandhi. But the most unfortunate thing is that they use the name and brand of Gandhi abroad to promote themselves as done recently in the US.The killers and terrorists are now sitting on the top of administration of the country as rulers in the guise of democracy.

All the countries in the power corridor have forgotten Gandhi and have made him a photograph for Azadi ki Amrit Mahotsav ! A country which celebrates the killing of Gandhi on Gandhi Jayanti, certainly deserves pity. Cry my beloved country , cry forever !

Let me tell you a story.

Every day early morning a little girl would come to the temple and stand before the idol,close her eyes and with folded hands,murmursomething for a couple of minutes.

The temple Poojari was observing her and was curious about what she was doing.He thought,she is too small to know the deeper meanings of religion,she would hardly know any prayers.But then what was she doing every morning in the temple?

Fifteen days passed and Poojari now couldn’t resist but to find out more about her behaviour.

One morning,Poojari reached there before the girl and was waiting for her to complete her ritual.

He placed his hand on her head and said,“My child, I have seen since the last fifteen days that you come here regularly. What do you do?”

“Do you know any prayers?”asked the Poojari with some suspicion in his voice.

” Then what are you doing closing your eyes, every day? He smiled.

Very innocently the girl said :*“I do not know any prayer, but I know “a,b,c,d….up to z.” I recite it five times’ and tell God that,”I don’t know your prayer, but it cannot be outside of these alphabets.” Please arrange the alphabets as you wish and that is my prayer.”

And she ran, jumping on her way out. The Poojari stood there dumbstruck,staring at her for a long time as she disappeared running in the wilderness.

Gandhiji’s Life is a story of our quest for democracy.Gandhi is a belief like the belief of that innocent girl.It goes for generations to generations. My father was with Gandhi, now I am, tomorrow my children will be.

All the saints were good story tellers but all the good storytellers are not saints.Congress has been treated like a milch cow which has now turned old. All wanted to milk it till the last drop and criminal politicians keep on doing storytelling on Gandhiji’s India and democracy.

Now, it’s the turn of some vultures.But,Bapu Never Dies nor democracy.