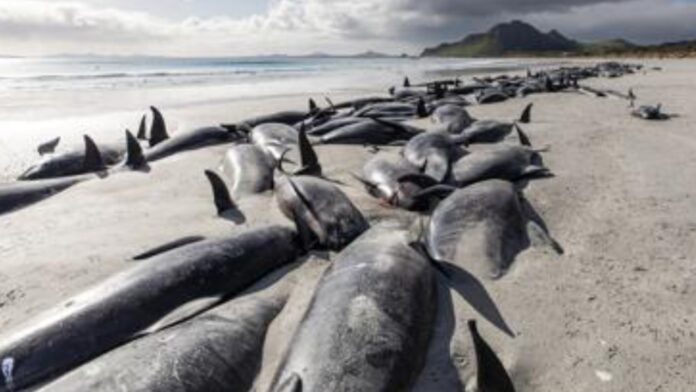 NF Times, Pratap Prusty : Some 477 pilot whales died after stranding in two remote islands in Newzealand beaches over recent days. The whales were died naturally or euthanized is really heart breaking, said Daren Grover, the GM of Project Jonah, a nonprofit group that rescue the Whales.
The whales beached on the Chatham islands, which are home to about 600 people and about 800 Kms eact of Newzealand’s main island.
According to thevreport, remote location and presence of sharks in the surrounding waters meant they couldn’t mobilize volunteers to try to refloat the whales.
“We do not actively refloat whales on the Chatham islands due to the risk of shark attack to humans and the Whales themselves, said Dave Lindquist, a technical marine advisor of the conservation department.As the report reveals, the deaths of whale in Newzealand came after about 200 pilot whales died in Australia after stranding themselves on a remote Tasmania beach.