The Dalit family of Narsinghpur are in scare of Administration’s hooliganism: Eviction carried out in presence of Revenue Inspector 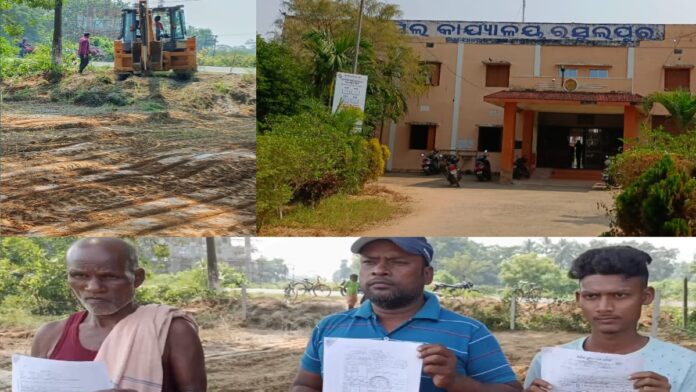 Kuakhia, Jajpur, Pratap Prusty – On Friday, an eviction drive, accompanied by the RI of Narasinghpur circle was noticed in a land of a dalit family in Narsinghpur, Jajpur. As it is reported, the eviction was carried out by the RI in pursuance of the order of the Tahasildar, Rasulpur.

The eviction was carried out in the land of a dalit family. As per the version of the family, the land measuring 41 Decimal was allocated to the family under the Orissa Bhudan and Gramdan Act, 1970. According to this act, certain land is allotted to the person belonging to the class of landless/destitute/schedule cast/schedule tribe for management of land from which he could mantain his livelihood. The family had been paying land tax(khajana) till 2013. Thereafter, the land had been converted to anabadi(benami). In this context, the family has file petition before the Commissioner of Land Record and Settle in 2021. The matter is yet to subjudice. However, all of sudden the local RI has carried out eviction on this land as per the direction of the Tahasildar. The family alleges that- this is mere the hooliganism of the administration. The question rises here that- has the administration given notice to the family in this context, is it amatter of extra involvement of administration while the matter is yet to subjudice?