TRS leaders have nothing to give except abuses: PM Modi in Hyderabad 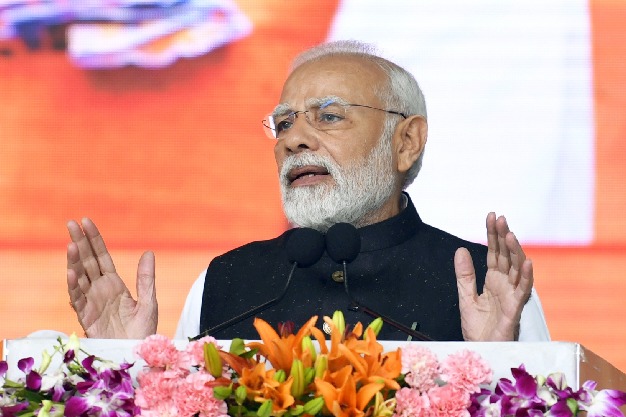 HYDERABAD: In what could be seen as Prime Minister Narendra Modi’s strongest warning aimed at the ruling TRS and his assurance for the people of Telangana, Modi has declared that those who were looting the poor in the State were not going to be spared.

Addressing a large gathering of BJP workers at Begumpet airport on his arrival in the city before heading to Ramagundam on Saturday afternoon, he pointed out “how some people who were trying to escape investigation into their corruption by central agencies; were forming an alliance of corrupt parties to prevent any inquiry against their deeds.”
Modi took the abusive language being used against him repeatedly by TRS leaders, in a lighter vein.
“Out of fear, disappointment and the influence of superstitions, some people are verbally abusing me day in and day out. They have published dictionaries of expletives used by them against me. I request the BJP workers not to get upset by those abusive statements, as they (TRS leaders) have nothing to give except abuses. Just make fun of it, drink a good cup of tea, and sleep with the hope that the lotus is going to bloom here soon,” he advised the party workers.
He said that politicians were there to serve the people and resolve their problems and that the political agenda of BJP always needed to be constructive, with a service motive.
“Since yesterday I have been touring Karnataka, Tamil Nadu, Andhra Pradesh and now Telangana. People ask me whether I don’t get tired of such a busy schedule. I tell them that I take two to three kg of abuses from people. God has blessed me in such a way that all those abusive words get processed inside my system and are converted into nutrition. It becomes the energy which helps me in serving the people,” he quipped, drawing laughter from the crowd.
Reiterating his Independence Day declaration from the Red Fort that BJP will root out corruption and family rule from the country, Modi observed that the people of Telangana wanted to elect a party, which could work for every family instead of one family.
Expressing his feelings about the way the people of Munugode have instilled their faith in BJP as indescribable, he felt that the BJP workers have brought the entire legislature to one constituency.
“Where the darkness fills all the directions, the lotus starts blooming there. In Telangana
the end of the darkness has begun and the results of by-elections held here show that the sun is going to shine and the lotus is going to bloom here soon,” he predicted.