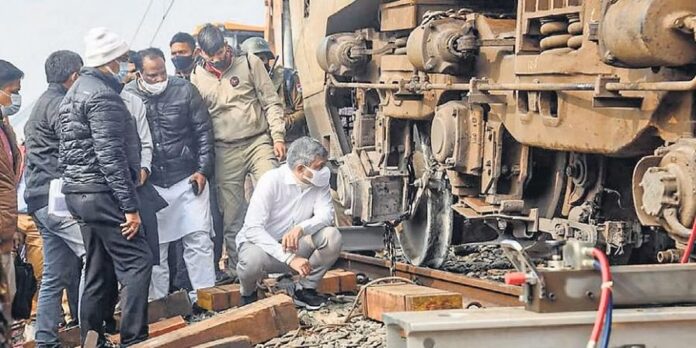 BHUBANESWAR/JAJPUR: Destiny is a strange beast. Balaram Bindhani knows why. He lost his wife and mother-in-law but his two-and-half-month-old child survived the mishap in what was nothing short of a miracle on Monday morning.
Balaram, on his part, had a providential escape too. But as much as he wants to celebrate the fresh lease of life for himself and the child, he mourns the loss of his wife. Police investigation based on eyewitness accounts said that Balaram’s wife Kandhei was waiting with her son and mother Parbati to board a train when the derailed wagons came crashing into Korai railway station’s waiting hall.
Locals claimed Kandhei possibly pushed her infant baby away on spotting the goods train hurtling into the platform. The 26-year-old mother perished, but not before saving her baby. Her mother Parbati too succumbed.
Incidentally, Balaram had just gone to fetch tea and biscuits when the mishap took place. When he heard a deafening sound, he rushed back. “I saw two wagons crashing into the station and rushed inside. I spotted my wife and mother-in-law under the rubble,” he said. His toddler child Biswajit was rushed to a hospital and his condition is stated to be stable.

A mother’s last act of bravery, a miracle child, and destiny at play

Parbati was shifted to Korai Community Health Centre and Kandhei was rushed to Jajpur district headquarter hospital. The mother-daughter duo was declared received dead by the doctors. Kandhei along with Biswajit and her mother Parbati was on her way to visit SCB Medical College and Hospital in Cuttack. Sources said Kandhei was supposed to undergo an MRI scan in the hospital reportedly due to a tumour in her abdomen.
“My mother and sister lost their lives in the mishap. My father is suffering from paralysis and I have two unmarried sisters too. We are a poor family with no landed property. Government must provide a job in the Railways along with financial assistance,” said Parbati’s son. Another woman, A Bibi (47) of Korai was also killed in the accident.
She was reportedly waiting to board a train to visit Cuttack to purchase medicines for her differently-abled husband. Many passengers were sitting in the waiting hall when the wagon of the goods train, en route from Dangoaposi in West Bengal to Chhatrapur in Ganjam, crashed into the railway station. Sources said the victims succumbed after being crushed under the debris of the waiting hall. About four wagons came to a halt after hitting a footbridge.
The ticket counter and other parts of the railway station were damaged in the accident. Jajpur ADM Akhay Kumar Mallik who was monitoring the rescue operation said three women were killed and four others were injured in the mishap. Jajpur SP Rahul PR said, apart from the infant, three persons – Madhaba Nanda Barik (57) and SK Sachin (32) of Korai, and Ramesh Jena (35) of Jagatsinghpur district were injured in the accident. Family members of the deceased and hundreds of locals staged a demonstration near Korai railway station demanding Rs 50 lakh compensation and a job in the Railways.