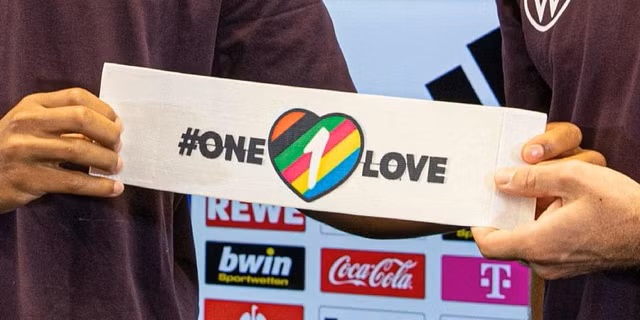 DOHA: England, Germany and five other European teams at the World Cup on Monday abandoned plans to wear a rainbow-themed armband in support of LGBTQ rights, citing the threat of disciplinary action from FIFA.”FIFA has been very clear that it will impose sporting sanctions if our captains wear the armbands on the field of play,” the seven teams said in a joint statement.
Under FIFA rules, players wearing kit that is not authorised by football’s world governing body could be shown a yellow card. If that player was then shown a second yellow card, they would be sent off.The “OneLove” armband due to be worn by the likes of England captain Harry Kane and Germany counterpart Manuel Neuer is designed as part of a campaign to promote inclusivity.
The armbands had widely been viewed as a symbolic protest against laws in the World Cup host nation Qatar, where homosexuality is illegal.”As national federations, we can’t put our players in a position where they could face sporting sanctions including bookings, so we have asked the captains not to attempt to wear the armbands in FIFA World Cup games,” the federations of England, Wales, Belgium, Denmark, Germany, the Netherlands and Switzerland said.
Monday’s decision came just hours before England were due to kick off their World Cup campaign against Iran and the Netherlands opened their tournament against Senegal. Wales are also playing later Monday against the United States.On Saturday, Germany’s veteran skipper Neuer insisted he planned to wear the “OneLove” armband regardless of the threat of sanction. “We have the complete backing of the (German Football Association), we have no fear,” Neuer remarked.
When the “OneLove” initiative was announced in September, Kane said he was “honoured” to join fellow World Cup captains in donning the armband. “As captains, we may all be competing against each other on the pitch, but we stand together against all forms of discrimination,” Kane said.”This is even more relevant at a time when division is common in society. Wearing the armband together on behalf of our teams will send a clear message when the world is watching.”