DRM, Waltair Division is a Pious Personality of magnifying vision

Buruea Head ( PKB): Sri.Anup Kumar Satpathy, currently serving as Divisional Railway Manager (DRM), Waltair Division Visakhapatnam is by and large a personality who strives hard to focus on the herculean degree of improvement of the railway undertaking of the country. He says ‘ Our employees are dedicated out and out not only in the implementation of central govt schemes and programmes but also sincerely rendering services to the general people of the country dependent upon the railway industry. During his surprise visit to the jagdalpur railway station, he inspected the administration as well as the facilities available there very minutely. Motivated the staff members of the railway dept with expression of some positive tips stating” As we are paid , we need to be morally obliged to invest our mental and physical energies for the welfare of the people in general and Special development of the railways in particular. There are numbers of public sector undertakings functioning accross the country but Railway dept stands atop in providing to meet the legitimate demand of the beloved passangers of the country. Mr.Satpathy while receiving the accolades of appreciative words from his staff members is never found to be arrogant nor getting depressed by the criticism of others. He does the works in a very sincere and pious gesture as his Boss Sri.Ashwini Vaishnav, a radiant Star in the horizon of railway ministry. Everyone across the country knows that our railway minister is not only hardworking but undertakes projects that never be taken before. So is our DRM, Waltair Division Visakhapatnam Sri Anup Kumar Satpathy.
Mr.Satpathy during his hectic schedule of surprise visit to jagdalpur, Jeypore, and Koraput was accorded with warm welcome and highly praised for his kind gesture of improving the quality of railways. Within a short span of time being spent both in Jeypore and Koraput, no description was as if necessary because his vision penetrated into the domain of the areas where there was requirement of infrastructure. He saw and understood. Many consider without any reservations “Mr Anup Satpathy is a remarkable employee of railways whereas his own staff members gossip” He is a wealth to railway dept.” Many do believe that lots of love and affection being given by DRM Sir is a matter of inspiration to us” 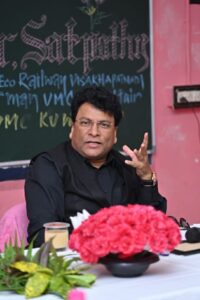 His upbringing of inner ethics always keep him adequately broad and magnifying to do the best services to the railway dept. He knows” Indian railways have been playing an excellent role in shaping the vision of our country for which our contribution honestly to the development of railways hold special significance. He believes “We couldn’t take part in the freedom struggle of our beloved country but we can contribute to our nation being a part of it no matter where, which field we serve” Just an hour of close interaction inside the Vistodom Train gave us the opportunity to decipher the radiant mission of this Visionary Personality Mr.Anup Ku Satpathy who emphatically says ” Never ask what the country has given you, better ask what you have given to the country”
Although his launching of surprise visit for doing inspection works seriously but a brief chitchat with Mr Satpathy can be described unique owing to his skills and experience to handle the situation. A man of vision with pious mission is requirement of the time.
Share
Facebook
Twitter
Pinterest
WhatsApp
Previous articleVisit of DRM Anup K.Satpathy to Jeypore Railway Station
Next articleMembers of Sub Committee – III of the House Committee on Environment of Odisha Legislative Assembly visit Rourkela Steel Plant